Yet more problems with significant figures, using a calculator for scientific notation and precedence 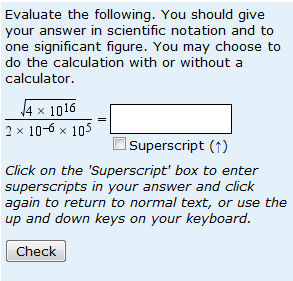 The question shown was originally planned to assess students’ ability to estimate, but since we can’t prevent them from using a calculator, I adapted it to test calculator use as well.

43% of the analysed 14943 responses were correct, and the errors made were depressingly familiar:

8.1% were numerically correct but expressed to the nearest order of magnitude not to 1 significant figure.

3.1% were numerically correct but expressed to 2 significant figures.

In 2.9% of responses, the square root on the numerator had only been applied to the first number (4 in the example shown)

So it remains the simple things that cause the problems. Sig figs, calculator use, precedence…