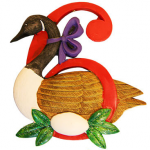 Day 6. Making multiple-choice better. Although I don’t, in general, much like multiple-choice questions, I have to admit that they can sometimes work very well. In conventional face-to-face settings, the use of electronic voting systems (‘clickers’) can bring lectures alive as well as informing lecturers about student misunderstandings. And it gets better – we don’t have conventional lectures at the Open University, but we are making more and more use of synchronous conferencing tools such as Elluminate Live! (now Blackboard Collaborate elsewhere) – which has a quiz function. I have seen the quiz function used most effectively to make Elluminate sessions much more interactive.

Another way in which multiple-choice questions can be most effective is to get students to write them, perhaps using a tool such as Peerwise.

But let’s retrun to the more conventional use of online quizzes as assessment. In order to make multiple-choice eAssessment as effective as possible, it seems sensible to start by checking that everything has been done to improve the quality of the questions themselves i.e. that we don’t have to worry about things like having options that are opposites or where a clue is provided by the fact that the grammatical construction of the stem of the question that doesn’t fit with some of the options.

Mutliple choice questions can also be effective when students  are  given the opportunity to explain their answers or to reflect on the process.