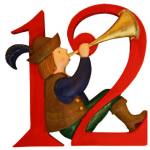 Day 12. Monitor and improve. One of the advantages of eAssessment (whatever you mean by that term)  is the ability to monitor actual student behaviour. This is not the same as what students say they do, neither is it the same as student opinion. Student opinion is important of course, but there are real inconsistencies between what students say they do and what they say they want, and what they actually do. The best documented of the inconsistencies is the fact that students ask for more ‘feedback’ whilst not collecting their marked work. I could write at length on reasons and possible reasons for this fact – but for now, let’s concentrate on actual student behaviour.

When you notice lots of students giving the same incorrect response to one of your questions, you can usually deduce something about the underlying misconceptions.  If the assignment is summative (so students are trying their best), the answers are entered as free text (so students are not being ‘led’ by the distractors) and equivalent errors are made for different variants of the question, then you can have more confidence in your conclusions about the misconceptions. You can use your insights to give targeted feedback, to improve your teaching and just to improve your understanding about student learning. Sometimes student responses can help you to realise that a question is ambiguous or that variants of a question are not of equivalent difficulty. Sometimes you realise that the question is not working at all and the only sensible option is to stop using it.

You can also  learn from the way in which students amend their responses (or not) in response to your feedback. There is more about this at:

It’s Twelfth Night. The Christmas decorations are down. Over and out from the Twelve Days of Better eAssessment.