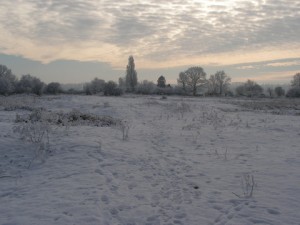 Until this morning, I thought the term ‘feedforward’ was something that had been invented recently – indeed, I thought it had its origins around the time of the FAST (Formative Assessment in Science Teaching) Project and the now famous Gibbs & Simpson (2004-5)literature review which was (I think! – I am now trying to be careful about what I attribute to whom) done as part of the scene setting for the FAST Project. I was certainly wrong about ‘feedforward’ – it turns out that the term was introduced by Mats Bjorkman in 1972 in the following paper:

Bjorkman, M. (1972) Feedforward and feedback as determiners of knowledge and policy: Notes on a neglected issue. Scandinavian Journal of Pyschology, 13, 152-158.

‘Feedforward’ is a useful term in that it makes us remember that we should be looking forwards not backwards. However, as I have argued previously, ‘feedback’ in its use in science and engineering is NOT backward looking. I have shown a picture of our current cold and snowy weather because it is prettier than a picture of my central heating thermostat (please bear with my rather peculiar logic which has led me to show this photo simply because central heating keeps us warm in cold weather). The thermostat uses information about the current temperature, to control the temperature in the future. This is feedback (actually ‘negative feedback’, but let’s not go there!) – a process that uses information.

So I don’t really like the term ‘feedforward’. I don’t think we need it. Let’s just remember that assessment feedback needs to be a process, most significantly a process that involves the student as well as the teacher, not just a flow of information from the teacher to the student. Then it will be forward looking. This is entirely in line with a mass of recent literature that argues in favour of assessment as a dialogic process.