The ‘interesting’ title of this post relates to the joint Variety in Chemistry Education/Physics Higher Education Conference that I was on my way home from a week ago. Apologies for my delay in posting, but since then I have celebrated my birthday, visited my elderly in-laws, moved into new Mon-Fri accommodation, joined a new choir, celebrated Richard’s and my 33rd wedding anniversary – and passed the viva for my PhD by publication, with two typos to correct and one minor ‘point of clarification’. It has been an amazing week! 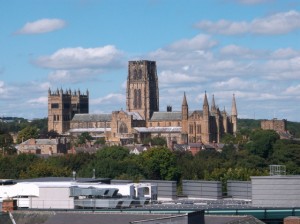 The conference was pretty good too. It was held at the University of Durham whose Physics Department (and, obviously, Cathedral) is much as it was when I graduated more than 36 years ago. However most of the sessions were held in the new and shiny Calman Learning Centre (with the unnervingly named Arnold Wolfendale Lecture Theatre, since I remember Professor Wolfendale very well from undergraduate days). There were lots more chemists than physicists, I don’t really know why, and lots of young enthusiastic university teaching fellows. Great!

Sessions that stood out for me include the two inspirational keynotes and both of the workshops that I attended, plus many conversations with old and new friends. The first keynote was given by Simon Lancaster from UEA and its title was ‘Questioning the lecture’. He started by telling us not to take notes on paper, but instead to get onto social media. I did, though I find it difficult  to listen and to post meaningful tweets at the same time. Is that my age? However I agree with a huge amount of what Simon said, in particular that we should cut out lots of the content that we currently teach.

Antje Kohnle’s keynote on the second day had a very different style. Antje is from the University of St Andrews and she was talking about the development of simulations to make it easier for students to visualise some of the conterintuitive concepts in quantum mechanics. The resource that has been developed is excellent, but the important point that Antje emphasised is the need to develop resources such as this iteratively, making use of feedback from students. Absolutely!

The two workshops that I so much enjoyed were (1) ‘Fostering learning improvements in physics’, a thoughtful reflection, led by Judy Hardy and Ross Galloway from the University of Edinburgh, on the implications of the FLIP Project; and do (2) the interestingly named (from a student comment)  ‘I don’t know much about physics, but I do know buses’ led by Peter Sneddon at the University of Glasgow, looking at questions designed to test students’ estimation skills and their confidence in estimation.

The quality of the presentations was excellent, bearing in mind that some people were essentially enthusiastic teachers whilst others were further advanced in their understanding of educational research. I raised the issue of correlation not implying causality at one stage, but immediately wished that I hadn’t. I think that, by and large, the interventions that were being described are ‘good things’ and of course it is almost impossibly difficult to prove that it is your intervention that has resulted in the improvement that you see.

In sessions and informal discussion with colleagues, the topics that kept stricking me were (1) the importance of student confidence; (2) reasons for underperformance (by several measures) of female students. We are already planning a workshop for next year!

Oh yes, and Durham’s hills have got hillier…

This entry was posted in conferences, gender and tagged confidence, gender, VICE/PHEC 2014. Bookmark the permalink.