Can formative-only assignments tell you about student misunderstandings? 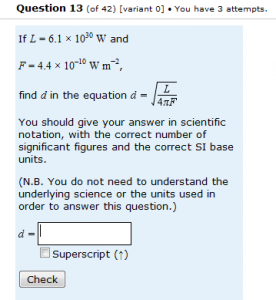 When I was doing the original analysis of student responses to Maths for Science assessment questions, I concentrated on questions that had been used summatively and also on questions that required students to input an answer rather than selecting a response. I reckoned that summative free-text questions would give me more reliable information on student misunderstandings than would be the case for formative-only and multiple-choice questions. Was this a valid assumption? I’ll start by considering student responses to a question that is similar to the one I have been discussing in the previous posts, but which is in use on the Maths for Science  formative-only ‘Practice assessment’. The question is shown on the left. The Practice assessment is very heavily used and students can (and do) re-attempt questions as often as they would like to, being given different variants for extra practice.

The first thing to note is that, not surprisingly, this question is less well answered than its equivalents in the summative end-of-module assignments.  Of 6732 uses, 1513 (22.5%) were correct at the first attempt, 1076 (16.0%) were correct at the second attempt and  527 (7.8%) were correct at the third attempt, leaving 3616 (53.7%) who didn’t get a completely correct answer, even after three attempts. It is also noteworthy (and common for non-trivial questions in formative-only uses of OpenMark) that there was a high percentage of blank responses and of responses that were repeated at second and third attempt without the correction of previous errors.  After filtering out these responses, we were left with 13480 responses, of which 3116 (23.1%) were correct.

An analysis of the 100 most commonly given responses (a total set of 8054 responses) enables us to identify the following common themes:

A total of 1652 responses (20.5%) were numerically correct, but gave incorrect units. In more detail:

And what of other errors?:

So what can we conclude? The blank and repeated responses, and also the number of responses that have no units at all, gives some indication that students are not trying so hard on a purely formative assessment. Perhaps this means that we should have less confidence in the results of the analysis of errors, but I still think it has some useful things to tell us.

The fact that m-2 and m2 were the most common incorrect units suggests that students “forget” to take the square root of the units, or perhaps they think that the square root doesn’t apply to the units.

The fact that giving units of  m-2 was the single most common mistake, and also that m-1 was on the list, suggests that students also have trouble seeing that the reciprocal of a negative power is a positive power. This is consistent with findings from other questions – students have problems with fractions, reciprocals and powers.