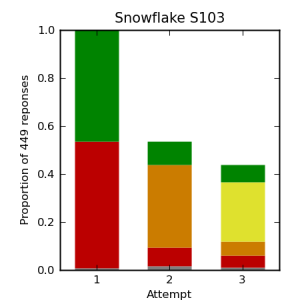 The figure shown on the left requires a bit of explaining. The three columns represent student responses at 1st, 2nd and 3rd attempt to a short-answer free-text question in formative use. Green represents correct responses; red/orange/yellow respresent incorrect responses. The reason I’ve used different colours here is to enable me to indicate repeated responses. Where a colour is identical from column to column, this means that an incorrect response from a first or second response was repeated exactly at second and/or third attempt. The colour grey represents responses that were completely blank. The figure shows that 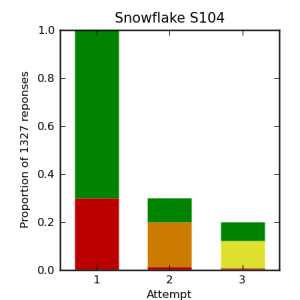 The figure on the right is for exactly the same question, but in low-stakes summative use. Not surprisingly, the proportion of repeated and blank responses is smaller. Now

In summative use, students are only likely to leave a response blank or repeat a response if they have absolutely no idea how to proceed i.e. if they don’t understand the question or the feedback provided. There’s a lesson for us there. I think there is also a lesson in the deeper engagement illustrated in summative use.

1 Response to Repeated and blank responses