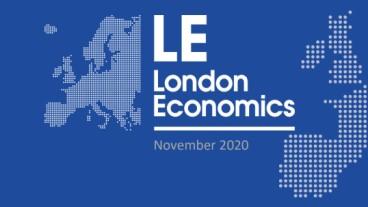 New figures place the total yearly economic impact associated with The Open University’s (OU) activities across the UK economy at £2.77bn – a figure which covers teaching and learning, research, exports and direct, indirect and induced impacts.

The new report compiled by London Economics The economic and social impact of The Open University in 2018-19 quantifies the overall economic impact of the OU across the UK as a whole and each devolved nation.  With the economic and social impact of the Covid-19 pandemic to be felt for years to come, the report’s findings demonstrate the value of the OU’s world renowned model of flexible supported learning, reinforcing the importance of and value in more flexible higher education provision.

The vast majority (85%) of graduates from the OU remain in the location where their study was undertaken, meaning investment in talent and skills, benefits local communities across every corner of the UK, in line with the UK Government’s priority to level up opportunity around the country. 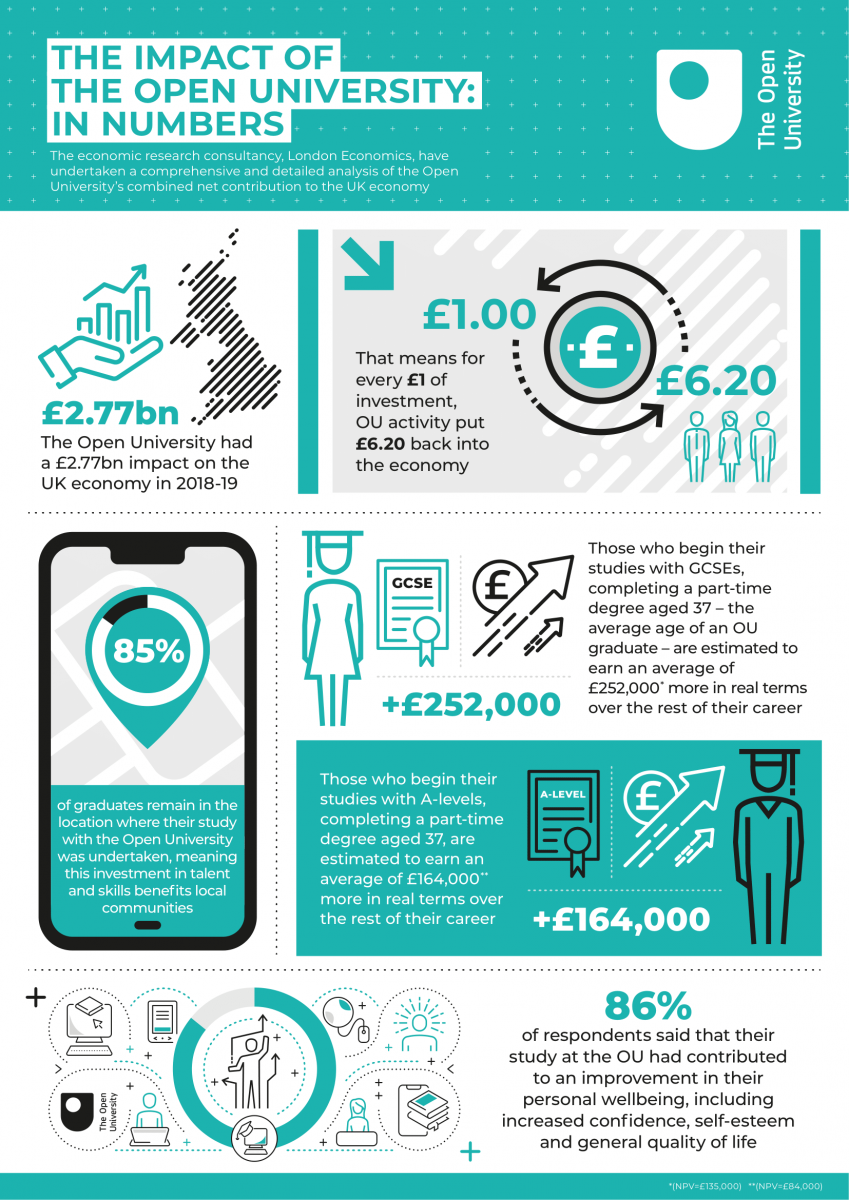 Overall, the report found that the total benefit of the OU’s formal teaching and learning activities for the UK-wide 2018-19 cohort of students – in terms of estimated additional career earnings – is £1bn1 – with a further £619m2 returning to the Exchequer.

Breaking this down, those completing a part-time degree at the age of 37, the average age of an OU graduate, are estimated to earn an average of £164,000 more in real terms over the rest of their career for those who began their studies with A-levels (equivalent to a NPV of £84,000 at Government discount rates)3.

But this average graduate premium significantly increases among those whose highest level of prior attainment was GCSEs or below. These graduates are estimated to earn an average of £252,000 more in real terms over the rest of their career, of which £104,000 in real terms is estimated to flow back to the Exchequer4 (equivalent to an NPV of £135,000 and £52,000 respectively). This reinforces the OU’s unique mission to make education open to all, supporting people from all backgrounds through their journeys to success.

Driving this economic benefit, two in three OU alumni (66%) reported improvements in their working life and prospects – across factors such as job satisfaction, pay and promotion prospects and employability. Of this group, 91 per cent said the OU had helped them achieve this.

With lockdowns likely to increase time spent at home across the UK this winter, informal teaching and learning will continue to offer important support to people.  London Economics estimate that the economic impact was £24.2 million in 2018/19 for the OU’s informal teaching and learning activities including FutureLearn (a social learning platform which the OU founded and now jointly owns with SEEK), OpenLearn and its YouTube Channel: £18.8 million of this is estimated to be contributed by FutureLearn, with an estimated £5.2 million contribution to the UK economy from OpenLearn – the OU’s free learning platform, where learners can explore a subject, get inspiration, build skills and confidence and earn recognition.

Looking at the wider social and personal impact, almost all respondents (94%) said that studying at the OU had improved at least one aspect of their personal development. Crucially, in an ever-changing jobs market, study had an impact on graduates’ attitudes to lifelong learning, with 84 per cent feeling that they had become more enthusiastic about education in general. Meanwhile, just over three in four (78%) respondents believed that their experience made them more likely to undertake further learning and training.

Similarly, 86 per cent of respondents said that their study at the OU had contributed to an improvement in their personal wellbeing – including increased confidence, self-esteem and general quality of life.

As of 2018-19, the OU supported 11,865 FTE jobs across the UK economy, with the direct impact from the OU’s expenditures across staff and operating expenses being £437.5 million. As with alumni, the majority of staff expenditure (55%) was dispersed around the UK outside of the main OU campuses, student support centres and offices5.

In challenging times for the economy and jobs market, support will be needed more than ever for people looking to retrain or reskill, people in “left behind” towns and cities and young people who are eager to boost their future career opportunities by gaining qualifications.

Quality higher education delivered flexibly, at a distance with support and powered by technology can play a significant role in helping the UK not only navigate the crisis brought about by the pandemic, but issues and inequalities present beforehand. Furthermore, there’s a clear benefit to the Exchequer too.

The Open University is well placed to continue to add value by applying its 50 years of knowledge on what makes flexible learning, underpinned by high-quality digital provision, work. We look forward to continuing to help boost income, job satisfaction and wellbeing among those who study with us – many of whom are looking to stay and apply their skills in their own communities.