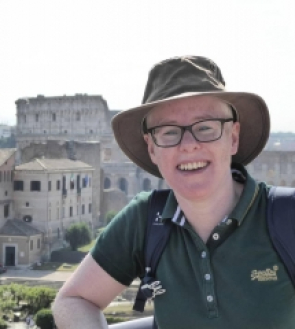 I graduated from the University of Sheffield with a degree in Archaeology and Prehistory, swiftly followed by an MA in European Historical Archaeology and a PhD examining the burial of the urban poor in Roman Italy. After this I was Rome Fellow at the British School at Rome (2005-2006), during which I conducted further research into Roman mortuary customs with a project concerning the rite of os resectum. Subsequently I spent some time as a project officer with an archaeological consultancy, held an early career lectureship at Cardiff University (2007-2008), two teaching fellow positions in the School of Classics at the University of St. Andrews (2008-09 and 2010-2011) and a further teaching fellowship at the University of Leicester (2011-2012). I joined the Department of Classical Studies in September 2012.

My research is focused primarily on the archaeology of Roman Italy and the ways in which it informs us about the construction of ancient identities and lived experiences. Mortuary practices and the treatment of the human body lie at the heart of much of my earliest work and I have written several articles which explore themes such as personhood and manipulation of the corpse, funerary commemoration and memory, as well as sensory interactions with man-made and natural environments. I am particularly interested in exploring the application of relational approaches to the Roman past. My recent book project addressed this by adopting a broadly posthumanist and new materialist approach to ancient lived religion, using assemblage theory to explore the intersection of divergent experiences of the body in relation to material things and religious practices in Roman Italy.

Recent work has also taken me into the realm of ancient disability and bodily well-being, particularly mobility impairments, as well as infant health and ritual practice in early Roman Italy, including a project focused on terracotta votive offerings modelled in the form of infants wrapped in swaddling bands. You can listen to a discussion about these here. This has led to an interest in votive practice more generally, especially anatomical ex-votos. In June 2012 I organised a conference on this subject at the British School at Rome (Bodies of Evidence). With Jessica Hughes I also edit a website devoted to discussion of votive offerings of all types: The Votives Project. I am the Deputy Director of The Baron Thyssen Centre for the Study of Ancient Material Religion and have regularly contributed to the Centre's audio discussions, as well as a recent online seminar series on 'Reassembling Ancient Religion' linked to the publication of my book Reassembling Religion in Roman Italy (2021). The recordings of these seminars can be viewed on the website.

I am Series Editor for Routledge Studies in Ancient Disabilities - please get in touch if you are interested in contributing to the series.

You can hear me talking about my experiences of making learning material for the OU and some of my research on ancient disabilities, votives, and sensory archaeologies in a Coffee and Circuses podcast. For Disability History Month 2021 I gave a talk (with captions and BSL) for the MMU 'Cultures of Disability' project/Manchester Classical Association on 'Disability in Ancient Rome: Discovering the Lived Experience of Ancient Mobility Impairments'. I also contributed to a Classics Confidential podcast on Roman Memory and a (filmed) British School at Rome 'Being Human 2018' event on 'Origins and Endings in Italian History', at which I talked about my research on Roman mortuary practices and the change from cremation to inhumation.

I welcome enquiries from prospective PhD students who would like to work in any of these areas. (You can find more information about how to do this on the Classical Studies Postgraduate Research Applications page.)

Graham, E-J. The haptic production of religious knowledge among the Vestal Virgins: a hands-on approach to Roman ritual. In A. Graham and B. Misic (eds). Senses, Cognition, and Ritual Experience in the Roman World. Cambridge.

In addition to the history and archaeology of the Roman world I have experience of teaching a wide range of subjects, from Etruscan Italy to Viking Scandinavia and from Greek temples to early Christian art. At the Open University my teaching contributions include chairing and writing for A340 The Roman empire. This Level 3 module draws on archaeological, textual and epigraphic evidence to explore what the empire was and what it meant to ‘be Roman’ in different places and at different times. I wrote about Roman childhood and the archaeology of the Acropolis for the module A229 Exploring the Classical World and I was also closely involved in the development of the MA in Classical Studies for which I wrote units on the Colosseum, zooarchaeology, working with inscriptions, the history of body studies, death and burial, disability and divine healing. I am interested in developing innovative forms of learning and assessment and completed a scholarship of assessment project looking at ways to re-design examinations. As Director of Level 1 Teaching (Arts) I was responsible for overseeing the initial stages of the remake of the Level 1 curriculum for the Arts programme and was chair of the Level 1 interdisciplinary module A112 Cultures, for which I wrote a unit about the Sanctuary of Apollo at Delphi among other things. I am also a Senior Fellow of the Higher Education Academy.

Watch a brief video introduction to A112 Cultures.