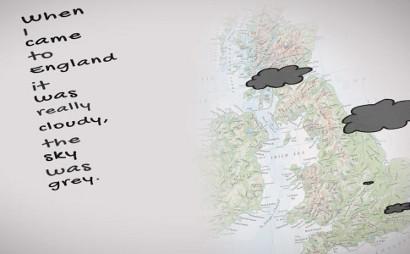 "Samir was 13 years old when I first met him. He had arrived in the UK from Afghanistan some years earlier. He was reluctant to talk in class about his home language, as some of the other pupils would call him a ‘terrorist’, so he kept that side of his life hidden. He did tell me though, that on his first day of primary school in England everyone else in the class was given an apple, except him. Because he did not speak English, he did not ask for one. His friend Omar offered Samir his apple, and they remained friends ever since. Even so, Samir did not talk to his friends about the language brokering he undertook at home.

Child language brokers are children and young people who translate and interpret for family members, friends and members of their community, who do not speak the host language. Using vignette interviewing methodology to explore ‘Language brokers as cultural mediators of cultural knowledge, identity and belonging’ (funded by the AHRC with Humera Iqbal, University College London) we wanted to explore how these young people managed any tensions and conflicts in their language brokering. Samir, for example, sometimes translated a letter from school for his mum, or booked her a taxi, or helped her at the shops. Largely he was happy to help, and these activities didn’t cause him any concern. But what about the time his little brother got really ill in the night and they had to take him to Accident & Emergency? Or the time he went to the bank to help his dad discuss some financial issues?

These potentially troubling language brokering activities take place against a backdrop of long-standing and ongoing austerity measures, which show no signs of easing. This has resulted in large cuts to language services, including professional and community translating and interpreting. Alongside this, the UK is highly multicultural with over 300 languages spoken in London alone, so there are not enough professional or community translators available across the wide range of services. The reality is that children will be used for this practice. Our aim then, is to explore and understand the lives of children and young people who are engaging in a practice that is already happening. All the negative situations, as well as the positive.

Alongside some of my colleagues working in this area (Lindsay O’Dell, Open University; Guida de Abreu, Oxford Brookes University; Tony Cline, University College London; Evangelia Prokopiou, University of Northampton and Humera Iqbal, University College London) we have been conscious that there are many instances where children and young people enjoy translating for family, feel very proud that they are able to do it and appreciate being able to use both their home and host languages. They feel that this gives them skills to add to their CVs and more confidence to talk to people. Some of our interviewees also feel that it helps them understanding both their home culture and host cultures better. Research has also shown that when children are prevented from using their mother tongue they feel it as a rejection of their identity. So, how do we strike that delicate balance between protecting children from potentially negative situations and ensuring they do not feel this rejection?

As part of our explore ‘Language brokers as cultural mediators of cultural knowledge, identity and belonging’ study we asked a group of language brokers to develop their own podcasts about their experiences of arriving in a new country, learning a new language and becoming a language broker. They spoke about both positive things, as well as the challenges. You can listen to some of their narratives in this short animation about ‘My life as a young translator’. Our hope, is that this animation will give other language brokers the stimulus and confidence to talk about their language brokering practices."

Written by Dr Sarah Crafter, Senior Lecturer in Psychology at the Open University. Her academic interests lie in the area of migration, diversity, belonging, identities and practices, with a focus on children, young people and families. With respect to her child language brokering work she was Principal Investigator on the AHRC funding Translating Cultures project ‘Language brokering: spaces of belonging and mediators of cultural knowledge’ (with researcher Humera Iqbal, University College London). Prior to this, she was Co-Investigator on a Nuffield Foundation project about ‘Child language brokering at school’ (with PI, Tony Cline University College London and researcher Evangelia Prokopiou, University of Northampton)."