Moon: crashing rocket will create new crater – here’s what we should worry about 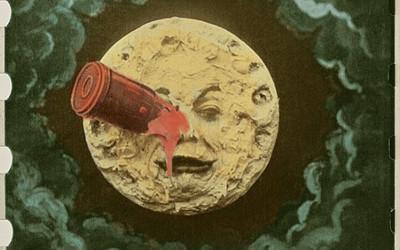 It’s not often that the sudden appearance of a new impact crater on the Moon can be predicted, but it’s going to happen on March 4, when a derelict SpaceX Falcon 9 rocket will crash into it.

The rocket launched in 2015, carrying Nasa’s Deep Space Climate Observatory (DSCOVR) probe into a position 1.5 million kilometres from the Earth, facing the Sun. But the expended upper stage of the rocket had insufficient speed to escape into an independent orbit around the Sun, and was abandoned without an option to steer back into the Earth’s atmosphere. That would be normal practice, allowing stages to burn up on re-entry, thus reducing the clutter in near-Earth space caused by dangerous junk.

Time lapse movie made from 5 hours of images, recorded by DSCOVR

Since February 2015, the 14 metres long, derelict upper stage, massing nearly four tonnes, has therefore been in a wide orbit about the Earth. Its precise movements have been hard to predict, because they were influenced by lunar and solar gravity as well as the Earth’s.

But we can now tell that it is going to hit the Moon on March 4 at a speed of about 2.6 kilometres per second. This will make a crater about 19 metres in diameter – a prospect that has provoked outrage in social media circles from people who are appalled that human negligence will disfigure the Moon in this way.

It is, however, surely more environmentally friendly for a dead rocket to end up on the Moon than being scattered through Earth’s upper atmosphere in the form of metal oxide particles, which is what happens during a re-entry burn up. The Moon also lacks an atmosphere to shield it from space debris, so it is accumulating naturally occurring impact craters all the time. 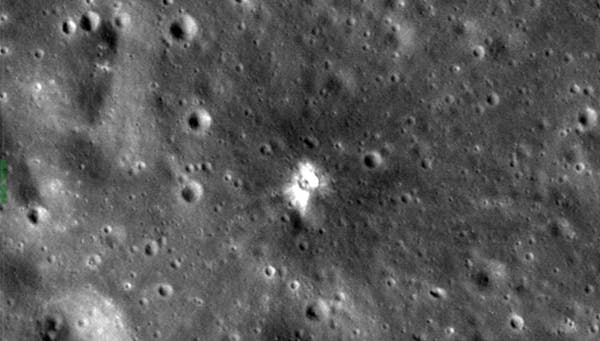 The Lunar Reconnaissance Orbiter has already imaged a 19 metre crater formed when a half a tonne lump of asteroid rock travelling about ten times faster than the Falcon 9 struck the surface in March 2013. Over the past decade, hundreds of smaller impacts, by chunks of rock weighing as little as half a kilogram, have been spotted by Nasa’s lunar impact monitoring project.

The coming impact will be on the lunar far side, so we wont be able to see it happen. But spacecraft orbiting the Moon will be able to image the impact crater afterwards. Will we learn anything new? There have been several previous deliberate crashes onto the Moon, so we know what to expect.

For example, the considerably larger upper stages of rockets used in the Apollo landing missions were crashed so that vibrations detected by seismometers installed on the surface could be used to investigate the lunar interior. The Apollo seismometers were turned off long ago, and is not clear whether the seismometer on China’s Chang'e 4 far side lunar lander will be able to provide any useful data this time. 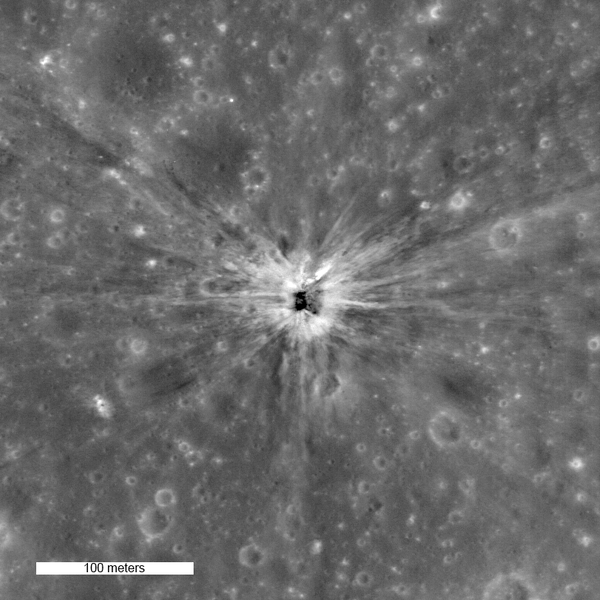 30 metre wide crater on the Moon from the Apollo 13 Saturn IVB upper stage.

A precisely targeted, deliberate crash was also achieved in 2009 when Nasa’s LCROSS mission sent a projectile into a permanently shadowed polar crater – making a smaller crater on its icy floor and throwing up a plume that proved to contain the hoped for water vapour.

So I’m not bothered by one more crater being made on the Moon. It already has something like half a billion craters that are ten metres or more in diameter. What we should worry about is contaminating the Moon with living microbes, or molecules that could in the future be mistaken as evidence of former life on the Moon.

Most nations have signed up to planetary protection protocols that seek to minimise the risk of biological contamination from Earth to another body (and also from another body back to Earth). The protocols are in place for reasons both ethical and scientific. The ethical argument is that it would not be right to put at risk any ecosystem that may exist on another body by introducing organisms from Earth that might thrive there. The scientific argument is that we want to study and understand the natural conditions on each other body, so we should not risk compromising or destroying them by wanton contamination.

The biggest recent breach of the COSPAR protocols was in 2019 when the privately funded Israeli lunar lander Beresheet crashed on the Moon, carrying DNA samples and thousands of tardigrades. Those are half millimetre long organisms that can tolerate, though not be active in, the vacuum of space. These, and presumably also the microbes that lived in their guts, are now scattered across the Beresheet crash site.

Most likely none of these will end up in a niche where there is enough water for them to revive and become active, but that is not a risk we should be taking. The DSCOVR Falcon 9 was not sterile upon launch, but nor did it carry a biological cargo. It’s also been seven years in space, so by now the risk of biocontamination is vanishingly small – but the more things we send to the Moon, the more careful we must be and the harder it will be to enforce any rules.

Read more: Swipe left-right to see before and after images of natural lunar crater