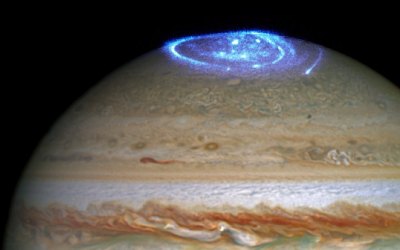 New data which can be applied to sensors to detect ultraviolet light will lead to a range of new applications in Space and for industry.

Researchers at the OU’s Centre of Electronic Imaging in collaboration with Teledyne-e2v, report on these findings in a paper published on IEEE Xplore.

OU authors, Dr Julian Heymes, Dr Matthew Soman and Dr George Randall, all from the OU’s Centre for Electronic Imaging, and their co-authors, report on how they used the Metrology Light Source synchrotron in Berlin to perform calibration measurements on a batch of sensors optimised for ultraviolet detection.

“Image sensors are everywhere, from your pocket to the infinity of Space,” said Dr Heymes. “Such devices have been developed and perfected for more than five decades and are particularly suited to detect visible light. However, due to the properties of silicon (the detecting material of these sensors) the detection of ultraviolet light is extremely difficult without careful development of optimised technologies.”

Teledyne-e2v is a company based in Chelmsford that has developed world-leading image sensors, including those on NASA’s Hubble telescope and ESA’s flagship Gaia mission. As part of their technology development, they tuned their industrial processes to optimise the treatment of these sensors for future ultraviolet applications – from space telescopes to observe exoplanets to ground applications.

The results provide a baseline of expected performance from these technologies to the world-wide community. The optimised performance opens the direct observation possibilities in the ultraviolet spectral range for many space, medical, scientific and industrial applications, and provides useful data over an unprecedented wide range of wavelength to support testing of models and for the prediction of sensor detection efficiency.

This is the first publication from a series of measurements we’ve performed in this research theme, where we’ve baselined the performance of Teledyne-e2v’s technology without any special enhancements for detecting ultraviolet light. Next, we plan to report the performance of enhancements made to this technology that can get even better results. We hope these improvements will be applied across huge variety of applications, from searching for very weak signals from weakly interacting particles from space (dark matter experiments), to medical imaging (such as ultraviolet skin imaging), to quality control in semiconductor manufacturers, and monitoring auroral emissions on both Earth and other planets.