In this article, Sharon Hartles examines the UK Government’s response in relation to the implementation of the recommendations set out in the Independent Medicines and Medical Devices Safety Review, First Do No Harm report. She explores how the Government’s response has impacted on those allegedly harmed by the side effects of Primodos, Mesh and Sodium Valproate. Sharon Hartles is a member of the Open University’s Harm and Evidence Research Collaborative. 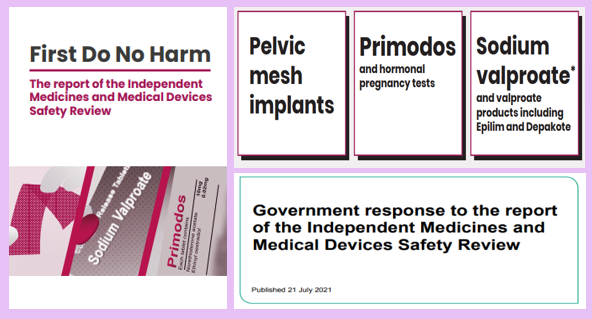 Following patient-led campaigns, on the 22nd February 2018, Jeremy Hunt, the then, Secretary of State for Health, commissioned a review into the potentially harmful side effects of three NHS treatments: Primodos; Mesh and Sodium Valproate. As a result, on the 8th July 2020, the Independent Medicines and Medical Devices Safety Review published the First Do No Harm report. According to Baroness Cumberlege, a life peer who chaired the Review, the 9 strategic recommendations and 50 actions for improvement set out in the report were carefully designed to ensure the objectives could be achieved. The major recommendations include: 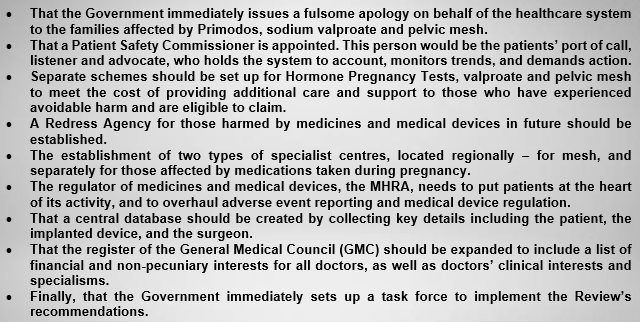 On the same day as the publication of the report, Matt Hancock, the then, Secretary of State for Health and Social Care, immediately responded with a public apology. He apologised on behalf of the NHS and the healthcare system to those who have suffered avoidable harm. The patient-led campaign groups welcomed this apology, in part because the immediate issuing of a fulsome apology fulfilled recommendation 1 of the First Do No Harm report. However, it soon became clear that the implementation of the remaining eight recommendations set out in the report would be fraught with resistance.

Finally, on the 21st July 2021, the Department of Health and Social Care published the Government response to the report of the Independent Medicines and Medical Devices Safety Review. A summary of the Government’s response makes apparent that the recommendations were not accepted in full as Primodos, Mesh and Sodium Valproate campaigners and advocates have tirelessly fought for:

(Order layout as in the image above).

In response to the Government’s publication, Marie Lyon, Chairwoman of the Association for Children Damaged by Hormone Pregnancy Tests kindly provided the following statement (26th July 2021):

My message is to the UK Government. You have proved you are morally bankrupt. Failing to implement Redress is a betrayal of the Unconditional Apology issued by both Matt Hancock and Nadine Dorries. Definition of an unconditional apology* Accepting the responsibility for YOUR Actions* The failures of the UK Regulator is YOUR responsibility. Redress is the most powerful way of making amends and freeing our families from the financial burden they have carried and will continue to carry for many years to come.  The decision not to implement Redress came directly from No. 10, who are far removed from the privations our families suffer and care even less.  Implementation of the 9 recommendations is about more than just 3 medical mistakes, it is about the safety of EVERY Patient in the U.K.  Unless the UK Government acknowledge and accept responsibility for these failures by providing redress, nothing will change and Patients will continue to be at risk. Progress has been made in accepting some of the recommendations, which was due to the influence of the Patient Reference Group, appointed to provide challenge, advice and scrutiny to the Government’s response to the Report. The PRG challenged each proposal for every individual recommendation, which resulted in the 4 recommendations accepted and 3 accepted in part or in principle. The failure to implement Redress proves that money is more important than accepting moral responsibility.

On the 21st July 2021, in a twitter post, Sling the Mesh (a campaign group founded by Kath Sansom) shared the following reaction to the Government’s response to the Independent Medicines and Medical Devices Safety Review report. 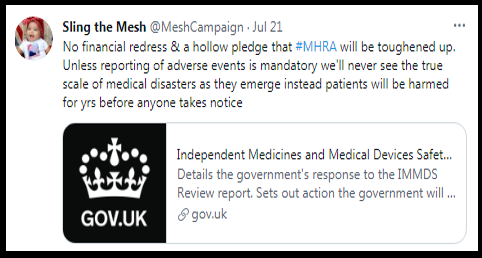 When asked to comment further Kath Sansom said: “It was cowardly for the government to only give a written response just before they broke up for summer recess. To ignore financial redress is incredibly cruel to all those families affected by Mesh, Primodos and Sodium Valproate. The battle is not yet over!”

The Government response to the Cumberlege Review is a cruel bitter blow to the thousands of children and families harmed by Sodium Valproate in Pregnancy. Despite Government accepting the Science and the damage it causes in Utero to a baby, and the lifelong damaging effects to the children. The INFACT campaign has proved Government had knowledge of the risks at licensing (1973) yet suppressed this information to the patient, and continued to allow Valproate to be prescribed without adequate warnings despite among other things the proven 40% risk of Autism to the unborn child. The very systems that were set up to protect and safeguard our children, ultimately disabled them.

In a House of Commons debate, Nadine Dorries, Minister of State at the Department of Health and Social Care, stated “I was honest and I stood here and said how desperately sorry I am and how harrowing those stories are. … I will be honest: we are not going to accept the redress agency in recommendation three, or the taskforce.” It is evident that a public expression of sympathy in no way replaces the need to financially redress those who have been harmed.

Primodos, Mesh and Sodium Valproate campaigners have warmly welcomed the Government’s acceptance of four of the nine recommendations and a further two in part and one in principle. The acceptance of recommendation 2, the confirmation that a Patient Safety Commissioner will be appointed, in a bid to reduce the risk of avoidable harm in the future is encouraging.  However, the campaigners are united in their bitter disappointment of the UK Government’s rejection of the remainder of the recommendations, in particular the recommendations which would have eased their financial burden. For this reason Primodos, Mesh and Sodium Valproate campaigners and those championing these plights will continue in their pursuit for justice.

If you wish to read more about these injustices, the following articles published by the Harm and Evidence Research Collaborative may be of interest:

Mesh: Denial, half-truths and the harms

Primodos: The next steps towards Justice

Primodos: The first step towards Justice