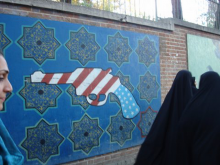 The 2009 presidential election in Iran saw unprecedented mobilisation of the young population, but the proclaimed result also triggered unparalleled anger. BBCPTV was caught in the crossfire, accused of fomenting a 'soft topple' and of broadcasting opposition materials.

We examined episodes of the interactive programme Nobat-e Shoma (Your Turn) to see; how much user-generated content it showed, which technologies were used, where this material originated from and what its general orientation seemed to be.

Preliminary findings suggest that it attracts a large number of callers from Iran and outside. Viewers contributions, which are made through email, phone, web cam, SMS and comments left on BBC's web site, are complemented by reviews of Iranian blogs and website. Two journalists moderate and direct the programme, which is not a simple unregulated 'open space' but nonetheless includes personal stories, observations, and not very refined or articulate commentaries on social/political events. The 'democratic' gloss of treating all individuals as experts and sources of knowledge is problematic, with most contributors speculating about events and revealing strong prejudices. The journalists work hard to emphasise that certain points raised by participants have not been proved, or that the reports presented by viewers are not verified by the BBC.

While most callers are from Iran, contributors from outside increased immediately after the presidential election as the restrictions on reporters and media increased. From then on the callers from outside Iran appeared to begin to provide news and information, including about solidarity campaigns outside of Iran. The programme certainly played a role in linking the diaspora with activists in Iran. Also, the programme became a very valuable source of first hand information as viewers sent in their images and films. Iranian activists also used this programme to exchange and receive information. News of future demonstrations, latest developments, casualty figures, and government tactics were raised by contributors not just for the benefits of the BBC but for activists in Iran. With further crackdown on newspapers, filtering of the internet and regular interruptions to mobile services, Nobat-e Shoma become a valuable space/avenue for exchange of information among Iranian activists inside Iran.