Buses need more than funding – they need a total redesign Boris Johnson, the UK prime minister, set out a £5 billion boost for buses and cycling in February, promising to make buses more frequent with simpler and more affordable fares. A month later, BBC’s Panorama picked up the issue, highlighting the social and economic cost of bus service cuts over the past decade.

The BBC quoted Department for Transport figures that show local and central government support for buses has fallen by £800 million since 2010. The elderly and disabled increasingly depend on ad hoc charity and volunteer services, while the low paid often end up using expensive taxis.

The number of people using buses in England has dropped by 10% since 2010, with the biggest fall in the north of England – down by up to 19% in some parts. The BBC analysis of bus route data indicated that 550,000 homes are at least 2km from a bus stop served by a very basic service of four buses a day.

There’s no doubt bus services need improving, and that the UK’s privatised bus model – with underfunded “last resort” public support – is failing those who have no other option, and making the bus an utter irrelevance to those with a car. 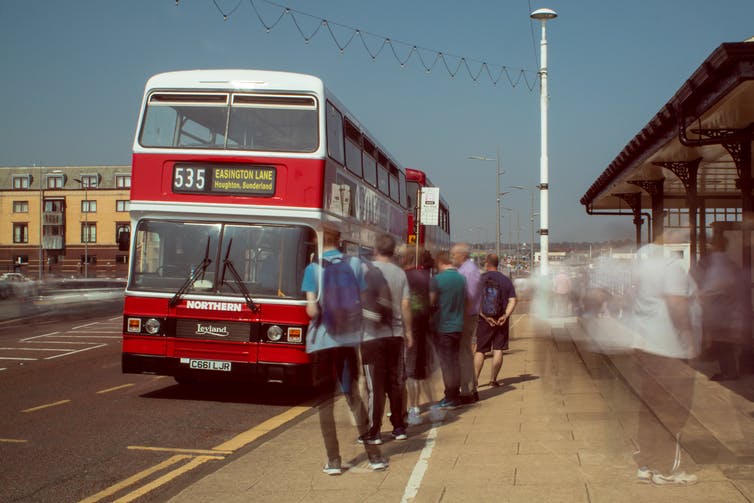 Most bus services in the UK are good at shuttling commuters between city centres and nearby towns, but they fail to capture the diverse journeys that digital taxi services like Uber provide for. AL Robinson/Shutterstock

Britain’s model for providing bus services may be broken, but there is a much bigger long-term issue that everyone seems to be avoiding. This is the very nature of how buses work.

Only 15% of trips are commutes. There has been a large growth in leisure and recreational travel that isn’t on urban corridors, but is dispersed away from major bus routes. Much of the reluctance to use buses isn’t about ticket prices or frequency, it’s simply that the core system design doesn’t map onto modern patterns of travel.

What’s needed is a redesign of public transport systems that’s fit for the 21st century. This would involve reinventing the bus, using smaller vehicles that operate more frequently, or only on demand, across a wide network of routes, not just flows along corridors to and from major centres.

The system should adapt as new technologies such as autonomous driving become available, which could substantially cut costs. Our research in the Future Urban Environments Group at the Open University has been exploring how digital technologies and new business models can help.

Bringing buses up to speed

This process is already underway, hidden in plain sight. Digital invaders to the taxi market – Uber, Kapten, Bolt and Ola – have wooed millennials in bigger cities, as their lifestyles and travel patterns match these services. But these digital taxi models fall short of being affordable for all public transport users.

Instead of modifying taxi operations, designing a ride sharing service based on modern tools like the smartphone could help bring the innovations of the digital taxi sector into mainstream public transport. A good example is the ViaVan service.

ViaVan’s model is a fusion between Uber and the bus. You book and pay by an app and go to a nearby pickup point where you are met by a minivan which takes you to the drop-off point that’s closest to your destination. The price is midway between a bus and minicab. Milton Keynes Council are running a trial to see if a ViaVan service at a bus-level fare (and accepting concessionary bus passes) can complement traditional bus services. 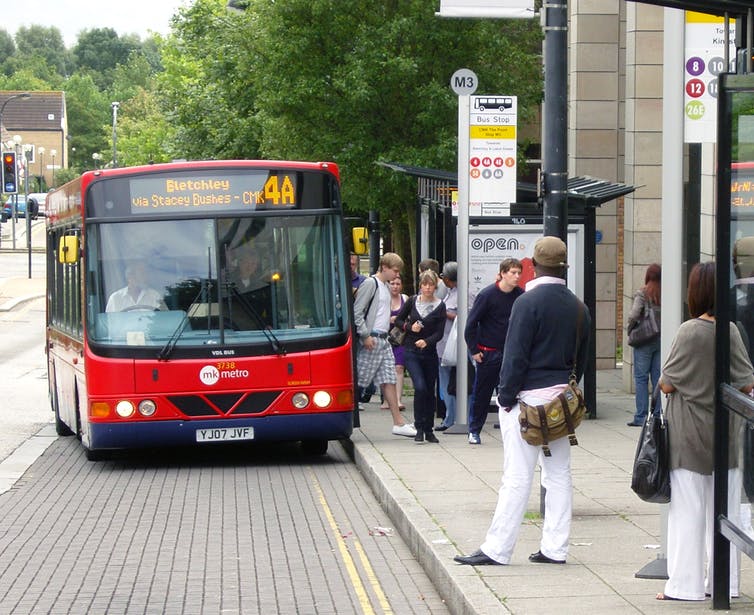 This trial is one small step in addressing the structural problems of the conventional bus system design. Yes, better conventional buses are still needed for their traditional market of shuttling commuters down big urban corridors. But there should also be a broader vision for how the digital world can reinvent the bus to work elsewhere.

Initiatives like those in Milton Keynes are rare. The existing bus industry is limited by its commercial skill set, so the public sector must lead the way.

How about using some of that £5 billion for a bus system transformation fund to start developing a real long-term solution for bus services, and not just prop up the old way of doing things