Hailing from all over Scotland and from all sorts of backgrounds, graduates had one thing in common: a fierce determination to fit learning into their already busy lives. Almost three-quarters (74%) of OU students are in work, a fifth have declared a disability, and 19% don’t have traditional entrance qualifications. Many look after family or have other caring commitments.

Susan Stewart, Director of The OU in Scotland, said:

“The commitment of our students is truly inspirational, juggling study with work, family and all sorts of other responsibilities, making their academic achievements even more impressive. The flexibility of part-time study with The Open University means that higher education is an option no matter what someone has going on in their life, helping to widen access to university, enabling people to learn while they earn, and developing the skills and knowledge Scottish employers need.

“It is the calibre of our students and graduates that attracts people to The Open University and I’m delighted to welcome our new honorary graduates to the OU family.”

Edwyn Collins, musician and producer and Doctor of the University, said:

“I’m amazed and grateful to The Open University for this honour. For someone whom my son calls a ‘college drop-out’, it’s quite something. I chose a different path, one of the self-taught, and was lucky. The OU gives everyone the possibility of a second chance, the possibility to change your life. And I’ve learnt how vital to a human being that can be.”

Maria Macnamara, CEO and Founder of Smalls for All and Doctor of the University, said: 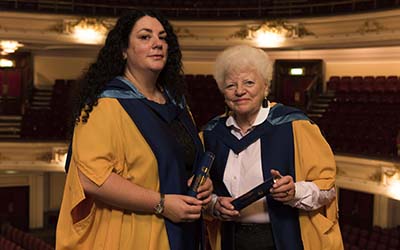 “I’m delighted to accept this award in recognition of the contribution Smalls for All has made to improving the health, education and wellbeing of women and children in Africa.  Recognition from The Open University is important in helping our charity to highlight the significance of and continued need for our work.

“The work that The Open University and Smalls for All do in Africa demonstrates a shared commitment to tackling poverty and inequality, improving health and wellbeing and, most importantly, access to education. Both organisations seek to make a real and lasting difference to poor communities across Africa and I look forward to developing our shared interests and aspirations.”

Andy Scott, sculptor and Doctor of the University, said:

“I am deeply honoured to receive this accolade from The Open University. I specialise in making art for the widest audience which incorporates research as well as artistic skill, so it's very rewarding to be recognised by an institution which shares the same broad values of accessibility and intellectual rigour.

“It's particularly valuable on a personal level as my father studied with the Open University but sadly circumstances overtook him and he never got to complete the course.  I like to think he'd be very proud of this award.”

Ruth Wishart, writer and commentator and Doctor of the University, said:

“Having gone into journalism straight from school – when most of my friends went to university – the lack of a degree was always a regret. Then, in my 50s, I took the plunge and signed up to an OU humanities course. Getting that degree, having that second chance, was absolutely wonderful. Being honoured subsequently by my alma mater with this Doctorate is a source of enormous pride".

Celebrating Care Day at the HUB for SUCCESS

A project which increases the educational opportunities open to people who have spent time in care is holding a drop-in event for visitors to mark Care Day 2020.