​Scotland benefits from the quality and impact of the wider OU's research, such as: innovations in floodplain management; the empowerment of people through intuitive technology; the development of a new theory of software engineering; improved decision-making in financial environments.

Open University in Scotland staff and research students are actively engaged in a varied programme of research work, which is of impact and relevance both in Scotland and further afield. This includes: 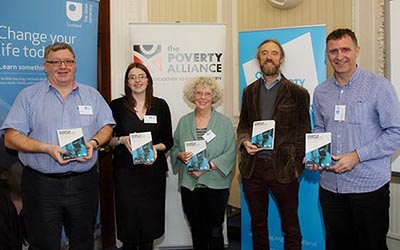 Dr Gerry Mooney, a Senior Lecturer and Staff Tutor in Social Policy and Criminology in Scotland, co-edited and co-authored Poverty in Scotland 2016, a new and updated 'state of the nation' report.

A unique collaboration between The OU in Scotland, Child Poverty Action Group (CPAG) in Scotland, Glasgow Caledonian University and the Poverty Alliance, it sets out how key tools, like social security, fair work, education and local government, could be used by the Scottish Parliament to transform Scotland toward a poverty-free country.

Dr Mooney is pictured, above far left, with the book editors and contributing authors at the launch. 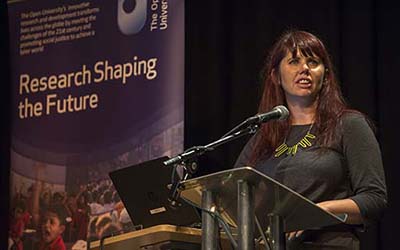 Dr Hayley Ness (pictured right) is a Lecturer and Staff Tutor for Psychology in Scotland, and member of The OU's Forensic Cognition Research Group. An applied cognitive psychologist, her main areas of interest and expertise include face recognition and perception, facial composite construction and eyewitness memory, plus more general aspects of memory, visual evidence and juror decision-making.

At a How can we solve crime? OU OpenMinds talk at Glasgow's Mitchell Library in Spring 2016, with a key focus on the role of citizens, Dr Ness spoke of her research into the way the public and police engage with social media. She is working with policing partners to better understand the use of social media in policing, both in terms of engagement with the public and the impact of citizen identifications on Facebook.

Recent papers Dr Ness has contributed to include Are two views better than one? Investigating three-quarter view composites, published in a special issue of the Journal of Forensic Practice on facial composites. 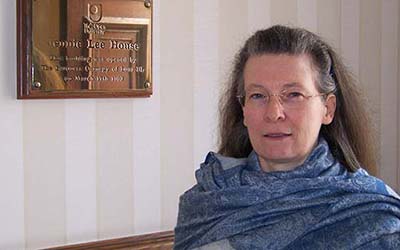 Dr Elaine Moohan, Senior Lecturer and Staff Tutor in Music in Scotland, is bringing medieval music back to life by producing a performing edition of the 16th century music of fugitive Scottish priest and composer, Robert Johnson.

She is interpreting and transcribing the medieval notation used to write down Johnson’s works into modern-day notation, which involves producing scores from sets of individual partbooks.

Dr Moohan won a research grant from the The Royal Society of Edinburgh to visit UK libraries - which have 36 of Johnston’s works in scattered manuscripts - to compile the volume.

Once published, it will enable schools and amateur and professional singing groups to perform the music, as well as being of interest to music scholars.

Recent research by Dr Moohan also includes investigating the remaining fragments of medieval books from Glasgow Cathedral and, as a Co-Investigator on the Listening Experience Database project, researching 19th-century Scottish diaries and letters that record individuals' reactions to listening to music.