The other thing that was discussed at yesterday’s ‘Analysing feedback’ session at the JISC online conference ‘Innovating e-Learning: shaping the future’ was the role of praise in feedback.

At the OU, we are very aware that students are receiving their marked work back in their own homes (I used to use a mental model of a student getting a marked tutor-marked assignment as they were eating their cornflakes – now it is usually an electronic process). In a distance learning organisation, you can’t assume that you will have an opportunity to soften bad news with a face to face conversation. We also have some students who haven’t studied for a long time and who lack confidence.

So the mantra is that our feedback should be positive, as in nice. People like me, who train our tutors in the art of ‘correspondence tuition’ (marking and feedback) emphasise the importance of this, and notwithstanding what I am about to say, I don’t think there is any place for rhetoric or sarcasm in our commenting. However I think we perhaps sometimes overdo the praise. 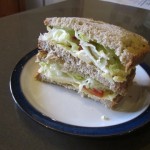 If you’re trying to make a ‘feedback sandwich’ on the cover sheet (something nice, then the meat of the summary comments, then an encouraging end) you end up tied in knots. A score of (say) 60% isn’t really that good. And what about 40%, or 20%? So if you are trying to find something positive to say, you either have to make a comment that isn’t backed up by the grade you award, or you end up skirting around the issue and looking for excuses. I have (several times) had to intervene when a tutor has said that the work is probably only not better because the student was rushed, only to have the student contact me in a huff because he or she had spent hours and hours on it.

The other behaviour that tutors can easily slip into is just saying ‘good’. I think it is really important to say what is good, and why (as well as what is not so good, and why). I’ve read somewhere that giving praise which is insufficiently specific can have a demotivational effect because (assuming I am the student now) if I am told that I am a ‘good girl’, I accept that praise as being about me as a person – then when I make a mess of the next assignment, I’m left feeling that I (not the work) is hopeless.  So the positive comments should be about something I’ve done, not about me!

Gywneth Hughes, in discussion on the conference forum, has suggested that perhaps it is the second layer of bread in the ‘sandwich’ approach that’s the problem. It’s good to start with the positive, but just making banal comments at the end might deflect from the impact of the real feedback. That’s a very interesting idea. Anyone for an open sandwich?