Reflections on the International Conference on Women in Physics

I’ll admit it, the link between this post and the blog’s declared subject matter is a bit tenuous. Some of my research is into demographic differences in attainment in physics, in particular apparent gender differences in attainment, which may or may not be as a result of particular types of assessment. I am also a woman, a physicist and Head of a School that is very proud of its Juno Champion and Athena SWAN Silver status, whilst being aware that there is still much we can do to improve our practice. 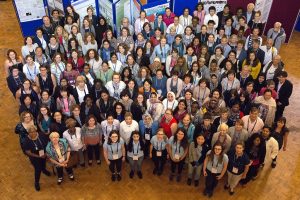 Thus it was that I found myself on the UK delegation to the International Conference on Women in Physics (ICWIP) in Birmingham (Photographs copyright Liz Hingley and the University of Birmingham). There were about 200 delegates from around the world, mostly but not exclusively women, itself really unusual in a field where only twenty-something percent of undergraduates are female, and where the “leaky pipe” means that female physics professors are rather rare. I have got so used to operating in a male-dominated world that I wasn’t really sure what I’d make of it and in some ways, with the perspective of hindsight, I’m still not sure what I did make of it. The situation for women in physics is by no means straightforward. I’d like to explore several different aspects.

One of the conference workshop series (not the one I went to) was about unconscious bias. I see unconscious bias on an almost daily basis, for example, today I was working at home and a rather irritating man came to to to door trying to sell me something. To his mind I was clearly the little housewife…Hmmm. At work, I’ve been confused for the assistant rather than the chair of an interview panel. And, yes I’ll admit it, sometimes I suffer from unconscious bias myself. Dr Smith…that’s a man, right. Not necessarily. The whole point about unconscious bias is that it’s an automatic reaction, I guess driven by society’s conditioning.

I also suffer, sometimes very badly, from imposter syndrome. What me…professor…Head of School?…no way. One day I’m going to be found out. I’m the pathetic, lacking in confidence, 18-year old who left home very young for University then surprised herself by doing quite well, but still didn’t have the confidence to stay on to do a PhD.

But yet, I don’t think I have ever suffered any discrimination for being a women, or a mother, and I don’t think either factor has stood in the way of my career. I stayed at home whilst my children were small and then worked part-time, but my husband then took a career break and he now does all the domestic tasks and has also shouldered responsibility for elderly parent care, first mine and now his.

The conference was a curious mixture of talks about women in physics and talks about physics itself, with Gabriela Gonzalez’s lecture on the search for and discovery of  gravitational waves being particularly good. We had inspirational lectures from Jocelyn Bell-Burnell, Julia Higgins and Athene Donald, and all alluded to difficulties in their careers as a result of society’s perceptions of the place of women. Jocelyn in particular talked about the fact that everyone was more interested in her announcement of engagement to be married than her discovery of pulsars.

[Incidentally, Jocelyn, in a fantastic talk given in association with her receipt of the Institute of Physics’ President’s Medal, also attributed the original discovery of pulsars in part to imposter syndrome. It goes something like this: there was a anomalous signal, but she checked, checked and double checked because she struggled to believe she was right…and when another signal popped up with the same characteristics, she recognised it. A more confident PhD student would probably have just put them down to noise.]

Much earlier in my career I had some small amount of reaction of the sort Jocelyn, Julia and Athene described: I married quite young, and my parents therefore assumed that I would be their “stay at home” daughter with no career ambition – not quite how it worked out in the end! However the significant thing is that I’m just slightly younger than Jocelyn, Julia and Athene and societal norms have changed a lot in my lifetime; being female and having a career is much less unusual than it was, certainly in the UK.

So, after much rambling, I get to the point of the conference which will stick with me for ever (alongside its sheer friendliness and supportiveness). The workshop series which I did go to was on “intersectionality” in other words exploring all the aspects of our identify which make a difference. So I’m a woman, a mother, and a physicist. I’m also white, British, middle class, straight and of a particular age. There were some touching and very honest reflections in the workshop from a gay black American woman; from several Indians about the impact of their caste on their life (and also that, culturally, those of Indian extract in the UK are encouraged by their parents to study engineering rather than physics, leaving a situation where one woman feels dreadfully isolated in a physics class whilst lots of people from similar backgrounds are studying engineering at the university down the road); and from a British woman who feels intimidated because she’s young (as I did once). 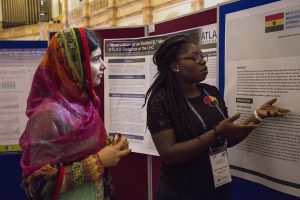 Then right at the end of the conference we had a surprise visit from Malala Yousafzai, which was extremely moving. What can I, a western woman, really understand what she has been through in the cause of women’s rights to education? The implications of her bravery will haunt her for the rest of her life; she arrived in an armoured car with her father and bodyguard and information about her visit was embargoed until she was safely somewhere else. Truly humbling, but yet on one level she was just another school leaver who had found physics quite difficult.

So, whilst one’s gender and sex are important, so are many other accidents of birth – where you are born, your ethnicity, the colour of your skin, your religion, your age, your sexuality, whether you have a disability etc. etc. It is right that we continue to fight for true equality of experience for all.

This entry was posted in conferences, equality, gender and tagged women in physics. Bookmark the permalink.