OpenMark e-assessment questions were used for the first time in a little 10-credit module called Maths for Science  that has been running since 2002. I did some analysis years ago into the mistakes that students make, but I’m about to start writing a second edition of the module, so I’m revisiting this work. One of the things that amazed me when I first did the analysis and continues to amaze me now is that students are surprisingly good at rearranging equations. However, they are surprisingly bad at substituting values into equations to give a final result, complete with correct units and appropriate precision. 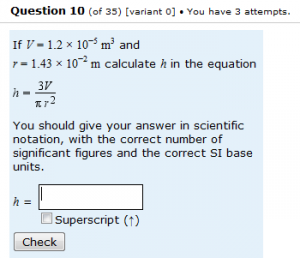 The most common problem, as you’ve probably guessed from the title of this post, was with the units. In general, it is not that people omit units entirely; units are given, but sadly they are wrong. The students are trying very hard, but clearly they struggle in this area. I’m struggling too – I fear that my teaching on this can’t be very good, but I don’t know what to do better. Students also have problems getting the number of significant figures correct.

The most common incorrect responses (for all variants of this question) were as follows:

3 Responses to More about units