Organisational Culture and the Role of IT – What will the ‘new normal’ look like? 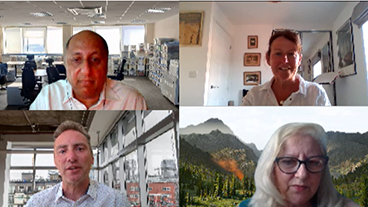 Remote working, resilience and ransomware. These are three of the topics explored in the recent BCS Leaders Forum webinar: Organisational Culture and the Role of IT – What will the ‘new normal’ look like?

More than a year into restrictions and remote working in the UK – and with final lockdown rules due to ease imminently – the British Computer Society and The Open University brought together a panel of experts to review IT issues in the new working landscape.

The event was chaired and moderated by Shakeeb Niazi FBCS CITP FIOEE FIET on behalf of the BCS IT Leaders Forum. The panel comprised:

Lyn Webb is The Open University’s first-ever Chief Information Security Officer. As if being the first incumbent in a new position isn’t challenging enough, Webb joined the OU just weeks before the UK went into lockdown. She spoke about the paradigm shift in how we do business, the impact on IT security, and the human challenge of the ‘new normal’.

Describing the scene when the OU closed its campus due to national lockdown, Lyn Webb says there was a ‘tangible nervousness’ as staff loaded their cars with office chairs and equipment to work from home. Like most of the country, they were ‘in shock’ at having to leave the ‘mothership’ that they had taken for granted as their work base.

Some people worried that they wouldn't get as much done; that they would get too distracted. There's this presenteeism piece too, where a lot of bosses and senior people are asking whether staff will be productive. Surely I need to be supervising them and see them working?

In this context, Webb found herself responsible for ensuring secure access for thousands of newly remote staff, maintaining system security for tens of thousands of distance learners, and defending against increased cyber-criminal activity.

The security risk from the ‘new normal’ has been two-fold. Not only increased cyber-attacks but also the challenges of the home working environment. Universities – as well as other organisations - have seen an increase in attacks, particularly ransomware.

‘Another thing for me from a security perspective was the prevalence of cyberattacks. The fact we’re all working online and have been for some time means we’re simpler for attackers and cyber criminals to find. We're all online. That attack surface is bigger and it's simplified for them. We have a bunch of people who are suddenly thrown out of their comfort zone - working from home in many cases - and more and more people are trying to attack us.’

Leeson agreed, saying that the use of personal devices – Bring Your Own Device or BYOD - leaves organisations more open to risk from social engineering attacks on individuals, which can be a back door into business systems.

An important consideration in this environment is honesty, says Webb. If employees are scared to report any potential security breaches and ‘brush them under the carpet’ that could be counterproductive.

A paradigm shift in attitudes

Webb describes a potential paradigm shift in organisations’ attitudes to remote working due to lockdown. She says leaders were forced to change their thinking from ‘this is why we can’t do it’ to ‘this is happening so how can we do it safely?’ Security is no longer used as a reason to stop more flexible working practices. Something Webb welcomes, given The Open University’s 50-year pedigree of providing distance learning to millions of people.

However, this new geographic freedom does pose challenges for institutions too. Leeson has observed a new approach to employment since the pandemic because people have far more options open to them now. They can work from anywhere and many people have decided they want more from their working life than they had before. There’s a risk of losing top talent if organisations can’t offer what workers need. For example, a work environment doesn’t always mean travelling into an office.

If we can, it’s about giving people choice using flexible working polices and making sure that they are as effective as they can be in a work environment, not an office environment.

The IT vs the human challenge

What all of the panel agreed on was that IT leaders need to understand that the ‘new normal’ isn’t just about process and technology, it’s about people. Something Jon Hall, senior lecturer at The Open University, described as the ‘socio-technological impact’ of remote working.

Remote working means employees miss the social side of work that helps them maintain good mental health, as well as informal opportunities to discuss and resolve problems, says Webb.

‘People can’t just stop and talk to each other in the corridor. They have to write emails or schedule 30-minute meetings. I've seen reports of email traffic in organisations rising between 25 and 50% compared to what it used to be. People are overburdened.’

Webb said she expected to see new job roles emerge in the future to help organisations navigate the new normal - such as Director of Remote Working - and welcomed the new focus on wellbeing in the workplace.

‘Wellbeing has become an agenda item in its own right, as opposed to something we just add on to the way we do things. Whether it's concerns about lone workers, new employees, burnout because of a need to appear online the whole time, or simply having back-to-back meetings. I think it's really made us think about it, and I think there's a lot more to come on that.’

Sonia Saxton has been working with businesses to help them understand the physical and emotional impact of remote working. She discussed the changes to brain chemicals when people are working from home, often alone, and stressed the importance of interaction, environment and physical activity to employee wellbeing.

The positive outcomes of lockdown

All of the panelists agreed that the ‘new normal’ poses challenges and asserted that – in their opinion – few organisations would return completely to old ways of working. But there are many positives to take away from the changes.

Hall described the opportunity ‘to bank’ the digital skills we’d been forced to develop during lockdown and use them positively in the future. Whilst Webb said we’d collectively become more resilient and innovative.

The key message from the webinar was that the new normal is here to stay and businesses need to adapt – something Webb felt very positive about. Her key takeaway for webinar attendees was not to be afraid to try things. ‘Everything that doesn’t work gets you closer to what does,’ she said. ‘Try to be excited about the new opportunities we’ve been presented with because we are where we are’.