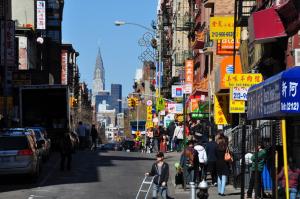 Unaffordable rents have put New York City's fabled diversity and creativity at risk. They have forced artists, small businesses and lower-income households out of the central areas, leaving them a monocultural wasteland of bankers and businessmen. Those who stay are crammed into ever more cramped and unsanitary accommodation, while those who now commute from distant suburbs make this the country's capital of gridlock.

To avoid a descent into the cosmopolitan elitism of Tokyo or Pyongyang, where only the richest and most powerful get to live in the big city, New York clings firmly to a system of rent controls. Rent increases on apartments are capped for longstanding tenants, and 'stabilised' when tenancies change hands to keep them at or below the rate of inflation. But a closer look at the model shows why it can't be easily exported elsewhere, especially in London.

To keep its rent control system working, NYC mayor Bill de Blasio is having to spend heavily to get more homes built, promising 200,000 more affordable units in the next ten years. This increase in supply is essential because, as economists have long pointed out, capping rents below the market level reduces the amount of property offered by private landlords, while boosting demand for it.

The availability of private rented accommodation declined sharply across Europe (especially the UK) through most of the 20th century, when rent controls were in place. This forced governments to step in and provide social housing.

The standard free-market argument against rent controls is that when they cap rents below their market value, it leaves too many tenants chasing too few properties. This also leads to a decline in quality as landlords seek to cut costs. And controls that curb rent increases for existing tenants can lead to landlords setting a deliberately high rent when a new tenant moves in or whenever a tenancy changes.

If applied only to residential property, rent controls can also lead to landlords using punitive commercial rent increases to protect their profits. This results in small shops and businesses being driven out, as in New York's Chinatown.

But, even though removing controls would make more private rented housing available, it tends to be accompanied by greater insecurity and much higher costs for tenants. It also doesn't allow governments to withdraw from the housing market. Instead they have to help out the growing number of families that can’t afford all their rent, and can’t move somewhere cheaper without compressing their children or losing access to their work. For example, in the UK, housing benefit is one of the largest and fastest-growing welfare expenditures. It exceeds £25 billion a year, despite numerous attempts to rein it in.

Although New York's rent controls are pushing it down the global league of cities whose property is snapped-up by the super-rich, they haven't prevented a steep rise in rents across the central districts since 2008. Advocates say that's because they don't apply widely enough; critics that they're squeezing supply.

The increases allowed on rent-controlled apartments can still force out those whose incomes don't keep pace, while tenants with stabilised rents are sometimes intimidated by landlords who want them to leave so they can charge new tenants more.

But there's a bigger reason why New York's controls, in place since 1943, couldn't be easily copied by cities that currently don't have them. Where controls were lifted earlier, as in the UK, property investment has become a major plank in people's long-term investment and retirement plans.

Many have borrowed to buy homes because the mortgage repayment is less than the rent on an equivalent property. Some have bought buy-to-let homes as a way to generate income. Imposing rent controls would upset their calculations, and cause particular problems for those who took high loan-to-value mortgages or mortgages they must pay back with buy-to-let income.

So while rent control might bring a sharp cut in housing benefit – 40% of which goes to private landlords – it is not a step the UK Treasury dares to take. Instead, its expanded help-to-buy scheme subsidises first-time buyers, which may even be contributing to a rise in house prices and therefore rents.

The adverse long-term impact on house building means that even charities working with the homeless and the under-housed are cautious about re-introducing controls, without complementary steps to increase supply. New York's property owners, meanwhile, accept the retention of controls because, without them, they'd be paying even more – to finance the Medicaid, food stamps and other subsidies that millions of tenants already need, as so much of their income goes towards housing cost.

Alan Shipman is a Lecturer in Economics at the OU and a former financial journalist. This article was originally published on The Conversation and we are grateful for their permission to reproduce it.