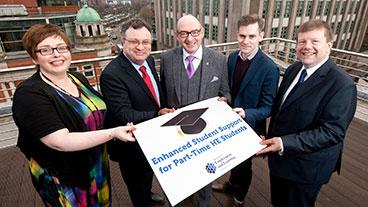 The Open University has warmly welcomed changes made by the Department for Employment and Learning that will allow more part-time undergraduate students to benefit from financial assistance to complete their studies, describing it as vital intervention to help meet the skills needs of Northern Ireland.

The proposed changes by the Department involve maintaining the existing fee grant for low earners and adding the option of a non-means tested fee loan for those who are not entitled to all, or any, of the grant.

Welcoming the announcement, John D’Arcy, National Director of The Open University in Northern Ireland said: This innovative new deal for part-time students will make higher education much more viable for people who need to balance their studies with other commitments, such as work or caring responsibilities.

The part-time fee grant is a huge incentive for low-earners to engage with higher education and to take the first step in transforming their futures. The addition of a “top-up” fee loan for those who, due to their combined household income, are not entitled to the full and any grant, will be a significant catalyst to encouraging more people already in the work force to upskill. This will be a vital intervention when it comes to meeting the skills needs of the Northern Ireland economy, particularly in the context of the cut to the rate of corporation tax in 2018.

We commend the Minister and his Department for developing a creative solution to part-time student support that is unique to Northern Ireland.

The OU Student Association representative in Northern Ireland, Nicci Simpson, and student President Ruth Tudor added, Part-time higher education has a hugely transformative impact of the lives of students across Northern Ireland. This improved package of support will allow many more people to benefit from the life changing opportunities that higher education brings.

John D’Arcy concluded by highlighting the impact of part-time graduates on the Northern Ireland economy: Part-time higher education allows students to continue to work and contribute to the economy, while increasing their skillset and ability to progress in their career. The economic impact of an annual Open University graduate cohort is estimated to be in the region of £44 million. A relatively small public investment in facilitating more people to engage in part-time higher education therefore has a huge dividend in terms of impact on the Northern Ireland economy.