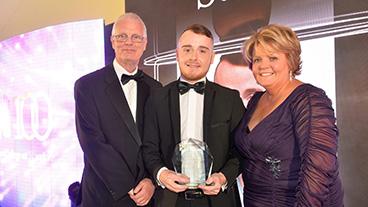 David is studying for a BSc (Hons) in Adult Nursing with The Open University. He began his OU journey in 2011 after seeing a poster in the Royal Victoria Hospital where he worked as a Health Care Assistant encouraging staff members to study for a certificate in Health and Social Care. After completing this qualification, he then progressed into a degree in Nursing. After five years of studying part-time alongside his job as Health Care Assistant, he will complete his course this year.

David says that studying with The Open University has enabled him to apply his new knowledge on a daily basis, and putting theory into practice. He says “I’m currently based in a stroke ward for my final student nursing placement and I’ve been able to apply what I have learnt through my OU modules and put my five years of study into practice.”

His Practice Tutor, Eleanor Weir, who nominated him for this award, said:

“David has displayed professionalism in each of his practice learning experiences. His mentors have noted that David always treats patients with dignity and respect. They have also observed that David carries out patient care with confidence and competence.”

For his final year project, David developed an advice leaflet undergoing skin biopsy. It will provide advice that is patient-friendly through the use of pictures and a clear, logical format. David plans to have the leaflet translated into a number of languages, thus empowering patients to make informed decisions about their treatment and care, particularly those whose first language is not English.

The special 20th anniversary event of the RCN Nurse of the Year Awards took place on International Nurses' Day. These awards provide the opportunity to highlight excellence within nursing in Northern Ireland and celebrate the contribution that nurses and health care assistants make to the health and well-being of the people of Northern Ireland.

“We couldn’t be more proud of the 2016 Student Nurse of the Year, David. He is an exceptional role model for his fellow students at The Open University and is developing the qualities of an excellent nurse.”

We are also delighted to continue sponsorship of the Learning in Practice Award at this special ceremony. This award was established to celebrate nurses who support student nurses, health care assistants and qualified nurses with learning and development in practice.”