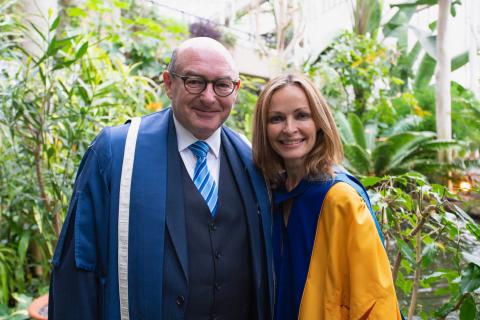 Singer, songwriter and violinist, Grammy nominee and Brit Award winner, Sharon Corr has received the honorary degree of Doctor of the University, for her exceptional contribution to education and culture at a ceremony in London today (22 March 2019).

Speaking about the award Sharon said:

“I’m so touched and incredibly honoured to receive this degree today. My music and my charitable work have been a source of great happiness to me and to be honoured for that is a dream come true.”

John D’Arcy, Director of The Open University in Ireland, presented Sharon for her Honorary Degree saying:

“While we acknowledge Sharon Corr’s major musical accomplishments, today The Open University celebrates Sharon’s contribution throughout her career to causes and charities that are in keeping with our mission of being open to people, places, methods and ideas. We’re not alone in recognising Sharon’s focus on helping others; she was awarded an honorary MBE in 2005 for her charitable work.”

She is an ambassador for the Nelson Mandela Foundation AIDS awareness campaign and the figurehead of OXFAM Ireland involved in campaigns to champion and empower women. She has also actively supported The Prince’s Trust and Live 8 for the Make Poverty History campaign, and is a patron of the Integrated Education Fund, Northern Ireland.

As part of The Corrs she sold over 45 million albums and toured arenas and stadiums across the globe. Her success has continued as a solo artist, with two albums released so far. She spent two seasons as a coach on the successful talent show The Voice of Ireland, sharing her experience and knowledge of music and the industry.