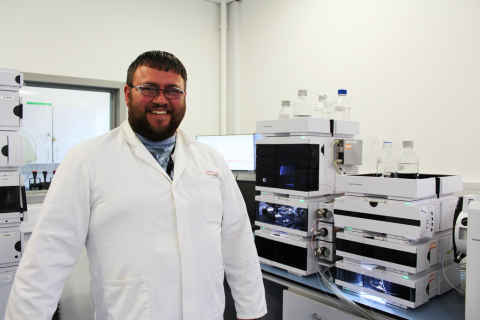 Peter is a Technical Leader in Mass Spectrometry with Almac Sciences based in Craigavon.

He chose to study with the OU due to the flexibility on offer as you study.

Peter initially started studying a Chemistry degree at a traditional university in England when he had to relocate to Northern Ireland for his family. He had already spent two years studying and didn’t want to start back at the beginning again. A couple of years later, when he was able to undertake study again, he looked at universities across Northern Ireland but couldn’t find an institution that would allow him to use his previous academic study.

Peter didn’t want to start fresh after he’d dedicated two years of his life to a degree in England. That is where The Open University came in. Through the OU’s credit transfer system he was able to pick up where he left off but this time his focus shifted to a Natural Sciences Degree. From here it wasn’t all plain sailing, Peter was at a stage in life where he wanted to settle down, have a family and buy a house. Throughout all this the OU gave him the opportunity to shift his focus. He could drop down to one module a year while continuing to give time to the priorities in his life.

It was while looking towards the future and undertaking his new course that a new and unique opportunity arose. Peter started working with Almac as part of their analytical team operating out of their headquarters in Craigavon. Along with full-time employment, the OU worked around Peter to ensure that he could still complete his new degree. A perfect combination of academic study and real-life practice.

He comments, “Completing my education and obtaining a degree with the OU has improved my career progression. It may be daunting to consider studying whilst working full-time however I found that my team and management at Almac were hugely supportive which made splitting my time much easier. The ability to obtain practical experience in a global organisation in many varied operational environments helped complete my understanding of the theory I was learning on my course.”

Peter also opted to change his degree from Natural Sciences to a BSc Open Degree. The OU again gave him the flexibility to do this. This allowed Peter the freedom to select the modules that would both benefit him the most and that he would enjoy studying. Whilst he wanted to focus on Chemistry, the Open Degree allowed him to complete modules in Investigative Maths, Engineering Design and Astrobiology.

Peter’s employer, Almac Group, kindly sponsored his studies and as a result he has now completed his degree and graduated.

“Now I have graduated I am really looking forward to my future as I continue to work with a great team at Almac.”

His advice to anyone considering OU study is simple.

Find out more about how your business can invest in it’s future by learning more about employee sponsorship here: https://www.open.ac.uk/business/why-ou/sponsoring-your-employees