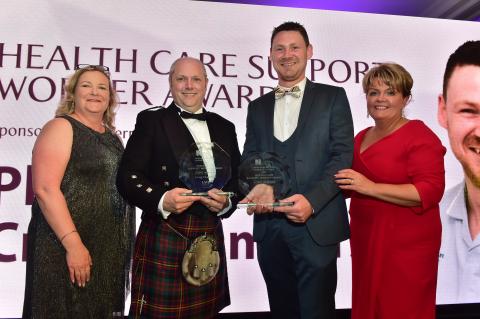 The Open University (OU) celebrated three accolades at the 2018 Royal College of Nursing NI ‘Nurse of the Year Awards’, at a ceremony held on 7 June at the Culloden Hotel.

The RCN awards provide the opportunity to highlight excellence within nursing in Northern Ireland and celebrate the contributions that nurses and health care assistants make to the health and well-being of the people of Northern Ireland.

Current student, Craig Chambers, from Newtonabbey, working as a Health Care Assistant in Antrim Area Hospital and studying Nursing with the OU. He said: “I felt very honoured to be nominated for the award by my manager, Sharon Love but to be able to get to the final and become a winner has been both an exciting and humbling experience.  To be chosen by the Royal College of Nursing to represent the work we as health care assistants do in Northern Ireland has been the highlight of my career.”

Craig was nominated by his manager, Sharon Love, Falls and Prevention Nurse in the Northern Trust, for his excellent communication skills and respect for his patients.

She says: “Craig is passionate about his work and the delivery of care that he provides to his patients. He often goes the extra mile, contacting relatives who live abroad, providing them with reassurance regarding actions taken to reduce their loved ones risk of falls. His empathy and passion for his patients has encouraged him to pursue a career in nursing.”

Joint winner on the night, Philip Martin, from Gilford, and working as a Health Care Assistant in Craigavon Area Hospital, had lots to celebrate as that same day, he also learnt he was had gained a place on The Open University’s pre-registration nursing programme.  Philip explains: “Now that I have won the award are I hope I can inspire my fellow care assistants in gaining this award and furthering their nursing careers through The Open University.

Cait McGoldrick, Head of Acute Elderly, Stroke Services and Patient Flow in the Southern Trust nominated Philip for the award. She said: “Philip is the essence of a caring professional and a role model for other health care assistants. Philip’s commitment to his own development, his awareness of patient care and his ability to advocate on behalf of patients, is exceptional.”

David Ferran, who is an Open University graduate, previous winner of RCN Student Nurse of the Year and Chair of NI Men in Nursing says: “It’s great to see three amazing ambassadors for nursing acknowledged for their impact on patient care. It highlights the impact men can have on nursing, patients and their families and will hopefully encourage more men to join the profession.”