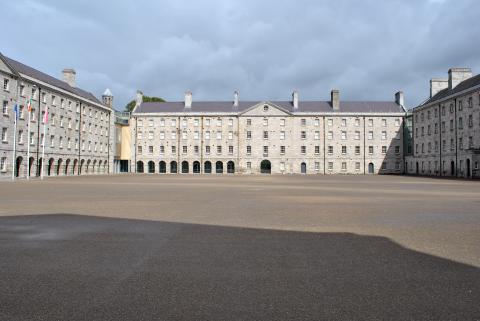 An Open University research project which is making historical army barracks’ buildings across the island of Ireland more accessible to people in the North and South has received funding.

The North-South Research Programme in Ireland has awarded The Open University (OU) and University College Dublin (UCD) €200k to deliver a project mapping, inventorying, and recording of the Army Barracks of Ireland, 1690-1921.

The aim of the project - co-led by Dr Suzanne Forbes, a Lecturer in History in the OU’s Faculty of Arts and Social Sciences and Dr Charles Ivar McGrath, a leading historian in early modern Irish history from UCD - is to facilitate a renewed interest in these sites since COVID-19 and to create an app that can be used to explore these sites online or in person.

Uncovering stories of 400 barracks
Ireland has the remains of about 400 army barracks scattered across the island, built between the 1690s and 1921. While a few remain in use by the military in the 21st century in both Northern Ireland and Ireland, the story of this built heritage is largely unknown or at times simply avoided because of its association with British rule. These sites can be contested areas of historical memory, especially in border areas. Indeed, differing attitudes towards the military and various political perspectives on the island can lead to very different understandings or misunderstandings of these buildings and their place in Ireland’s history and culture.

This project looks to uncover the story of all these barracks and to facilitate the public in visiting these sites with a new understanding and appreciation for that history, and the place of these buildings and complexes within Ireland’s built heritage and culture.

Strengthening collaboration between North and South
Over the 18-month project, which begins in September 2022, the project team will work to inform the interpretation, preservation, and social and economic value of historic barracks sites in the future. The OU will focus on collecting evidence and generating an output related to Ulster/Connacht areas and UCD will focus on Munster/Leinster areas of Ireland.

This project will strengthen research, innovation and collaboration between the OU and UCD and deepen links between higher education institutions in Ireland and Northern Ireland. Innovative project outputs will benefit local communities across the whole island, North and South, by enhancing research, teaching and lifelong learning, and fostering constructive and inclusive dialogues around our shared military heritage.

“This grant will help us to uncover the story of historic army barracks across the island of Ireland, improve our understanding of the history of these buildings and their place in our world today.”

‘It is a great opportunity to foster research collaboration in Arts and Humanities between UCD and the OU at an island-wide level, and to feed into the Government of Ireland’s Shared Island initiative via this North South Research Programme. So much more can be made of our built military heritage throughout Ireland – both North and South – and it is the aim of this project to highlight and energise such possibilities.’

Find out more about OU Research in History