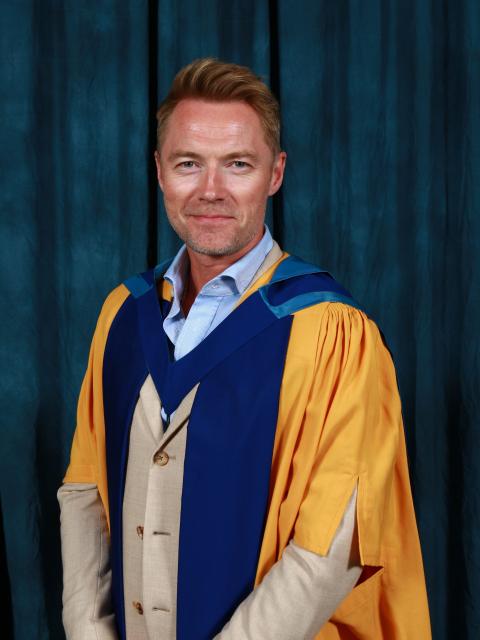 Ronan Keating has received an honorary degree from The Open University in recognition of his philanthropic contributions to charities over the past 25 years, particularly to improve cancer care.

The Dublin-born musician, songwriter and presenter of BBC ONE’s The One Show, stepped up to receive the accolade for his charitable work following the loss of his mother to breast cancer in 1998.

The former member of Irish band Boyzone set up the Marie Keating Foundation with his family, initially to establish mobile cancer awareness units that travelled around Ireland offering advice about prevention and early intervention.

Its aim is to ‘make cancer less frightening by enlightening’. Now it is one of the largest and most important healthcare charities in Ireland and partners with Cancer Research UK to provide a similar service across the UK fully funded through Ronan’s fundraising initiatives.

And those initiatives have been many, from running in the London Marathon, walking the length of Ireland, twice, and hosting an annual ball.

He swam the Irish sea as part of a celebrity team that set a new Guinness World Record for open-water swimming and was honoured with a special achievement award by Cancer Research UK as a result.

He has also contributed to other charitable organisations including Christian Aid and Comic Relief, when he climbed Mount Kilimanjaro with a group of other celebrities and has also served as a UN Goodwill Ambassador.

Ronan said: “I feel extremely proud to accept an Honorary Degree from the Open University, especially as it is in recognition of the charity fundraising I feel so passionate about on behalf of the Marie Keating Foundation and Cancer Research UK.”

John D’Arcy, Director of The Open University in Ireland, said: “At The Open University, we share Ronan’s commitment to improving the prevention and treatment of cancer, and pride ourselves on the world-leading research of our doctors and scientists. We are therefore delighted to honour his efforts to further this vital cause.

“Ronan’s charitable work has changed the lives of so many people across Ireland and the UK and it is a privilege to acknowledge that today with the honorary degree of Doctor of the University.”