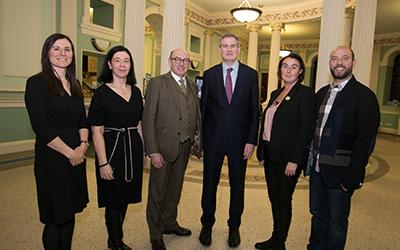 On 20 November The Open University ran an event in the National Library of Ireland in Dublin as part of the year-long ‘Bliain na Gaeilge’ (Year of Irish) initiative.

Opened by Seán Kyne TD, Minister of State for the Irish Language, the Gaeltacht and the Islands, the event showcased The Open University’s cutting-edge methods to teach and learn languages using technology and digital innovation.

Associate Professor of Information Technology from Dublin City University (DCU) Mairéad Nic Giolla Mhichíl spoke about supporting people who speak, engage and experience Irish in its many forms – particularly digital. She shared the experience of learners on DCU’s massive open online course ‘ Irish 101: An Introduction to Irish Language and Culture’. This course, which is co-funded by the Department of Culture, Heritage and the Gaeltacht with support from the Irish National Lottery is delivered on The Open University’s FutureLearn platform.

Senior Lecturer at The Open University, Fernando Rosell-Aguilar, looked at the cutting-edge technology and pedagogy that The Open University uses for teaching languages. He also looked at the results of such initiatives on platforms such as FutureLearn, the use of apps and social media to learn languages, and the benefits of such technology in our busy 21st century lives.

Minister of State, Seán Kyne spoke about how initiatives like our FutureLearn partnership with DCU to provide free Irish courses are crucial in meeting several targets of the Irish Language Strategy, including adult learners and technology.

In attendance were TDs and Senators, a range of stakeholders from Irish language development associations and general public interested in using technology to learn languages.