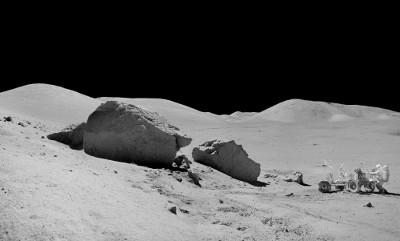 The Moon provides a unique record of how the terrestrial planets were formed and shaped by geological processes through time. It has been a widely held view that magmas rising from the lunar interior were responsible for helping to build the lunar crust, whereas impacts from colliding asteroids and comets have been seen as a destructive process.

The scientists conducted new research on a sample collected by NASA astronauts during the Apollo 17 mission to the Moon in 1972. They found that the sample contains unique mineralogical evidence, which is formed at incredibly high temperatures, in excess of 2300 °C. This can only be achieved by the melting of the outer layer of a planet in a very large impact event.

Researchers from The Open University, Royal Ontario Museum, University of Portsmouth, Swedish Museum of Natural History and the University of Manchester, used a technique called electron backscatter diffraction to discover the former presence of cubic zirconia, a mineral phase that would only form in rocks heated to above 2300 °C. Radiometric age dating of the grain revealed that it formed over 4.3 billion years ago, indicating that large impacts were critically important to forming new rocks on the early Moon.

This study highlights the value of sample return missions and careful curation of samples for future generations of researchers. This multi-institutional collaborative research was a direct outcome of our ongoing effort to re-analyse Apollo samples; using modern analytical instrumentation for addressing major science questions in planetary sciences.

The Open University’s contribution to this work was partially supported by a consolidated grant from the Science and Technology Facilities Council and the European Commission’s Horizon 2020 grant.

An interactive image of the mineral analysed in the Apollo sample, 76535, can be viewed online using The Open University’s Virtual Microscope. Additional free learning resources about the Moon, including “Moon Minerals - a Visual Guide” are available on the OU’s OpenLearn portal.

This article was first published on the OU News website. Read the original article.