Day 28, Year of #Mygration: Asylum seekers in detention in Greece 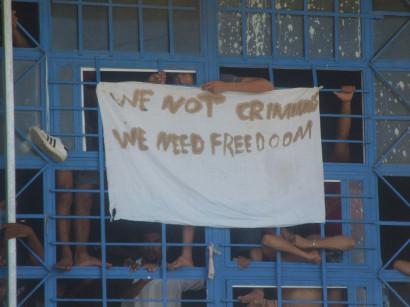 Written by Dimos Sarantidis, a PhD student in the Department of Development Policy and Practice (DPP) at The Open University. His research is focusing on Greece and specifically on the intervention of NGOs and other surveillance bodies, after the so called “refugee crisis”. He is exploring their role, and the effects this intervention has on local communities.

"Between 2008 and 2015, I was working as a human rights lawyer in various refugee detention centres in Greece. Due to the fact that the Greek state was not providing any legal aid for detained asylum seekers the burden of the provision of free legal aid was on very few NGOs. However, the needs were huge and the provision of free legal aid extremely limited. I was one of the very few lawyers who had unlimited access to detention sites while, I was frequently the only one accessing detainees in police detention centres in some of the Greek Islands. Consequently, the dilemma of prioritising and excluding or including cases became for me one of the most difficult tasks of my work, one great ethical dilemma and literally a nightmare. I remember, for example, every morning when I was entering into Pagani detention centre in Lesvos Island[1] there were up to 1,000 refugees detained there and the first thing I can recall is their voices. They were desperately calling me; “lawyer! Mr. Dimos!” Everyone was in need of legal aid. I was writing reports on the situation there and almost every evening I was trying to directly inform solidarity networks in order to find ways to make this horrible situation for refugees to come to an end.

I also had the duty to provide legal aid for individual cases. The main dilemma was always the same. Should I focus on the writer from Iran who had been tortured due to his political beliefs? Should I give priority to the unaccompanied minor who was illegally detained or the woman who clearly was a victim of trafficking? This list was always long and never ending. Between 2013 and 2015, as a coordinator of an NGO legal team I had to face the same dilemma again. When my colleagues were not sure which case to prioritise, include or exclude they were referring it to me. To decide whose life is more or less important was an unwanted authority that was assigned to me. At the same time, I was witnessing a continuous state crime taking place, which was silenced. Thousands of asylum seekers were in detention and their access to legal aid was almost absent.

In the middle of the so called ‘refugee crisis’ I therefore decided to have a career break but, due to the huge intervention of INGOs in Greece, my expectation was that people in detention would now have more options  in the provision of legal aid. Now that I am regularly speaking with former colleagues I am always asking them what is happening with those in detention. It looks like that they are not even a target group for most of the NGOs and, as a result, not a priority. One of the most expensive humanitarian responses in history is taking place yet still so many in need of legal aid are being excluded. There is not even a dilemma of prioritisation anymore. All are treated as deportable, thus lost cases."

[1] Pagani was one of the most (negatively) famous detention centres during 2009. When the Minister of the Protection of Citizen visited it he described it as “worse than Dante’s inferno”.