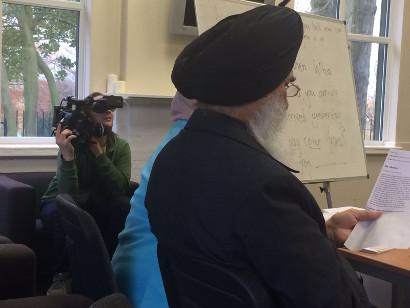 "How often have you heard statements such as, “If you come to this country, you have to learn English.” Yet, in contrast, how often have you heard about the barriers that prevent asylum seekers and refugees from doing so? (You can take a look at Refugee Action’s Let Refugees Learn and Locked Out of Learning if you’d like to redress the balance.) In a double whammy, at the same time as asylum seekers and refugees are facing calls for them to attend compulsory English for Speakers of Other Languages (ESOL) classes, due to government cutbacks the number of classes is drastically declining, with reports of three-year waiting lists in some areas. In response, civil society is having to step in to meet the need, pointing to the government’s failures to implement appropriate integration policies.

Juan (not his real name) was introduced to me through a colleague, due to my background working and researching refugee community organisations, to help tell his story of being an asylum seeker in the UK. From the beginning I was overwhelmed by his sense of conviction. Not only in challenging the negative stereotyping of asylum seekers, but in his all-encompassing support for others, from holding local cultural events to setting up a Spanish-language church and cooking Christmas dinner for anyone that would be alone during this time. But what was most infectious was his never-ending supply of embraces and kind words to anyone who needed uplifting.

Throughout all these acts of kindness, however, I also caught glimpses of the struggle he and his family were facing following their five-year wait to hear from the Home Office whether or not their asylum claim had been granted the right to remain within the UK, and the underlying sense of uncertainty and loneliness this created.

From our first meeting with Juan we knew he had a unique story to tell, one that a traditional approach of conducting research and interviews, followed by the writing of academic papers, could not do justice to. We therefore decided that while research questions would frame the process, we would negotiate a balance between theories and methodologies (from the fields of both social sciences and documentary) to acquire knowledge through a more practice-based approach.

Juan’s commitment to supporting his local community is most evident in the ESOL classes he set up three years ago, so we decided to focus on this. Although he has very few resources to support himself and his family, through his shared vision and a process of mobilising others, the classes have grown to meet the community’s needs. Not only do the classes offer a real-life example of the drive from asylum seekers, refugees and other ethnic minority communities to learn English, but the inclusive approach to running them also illustrates their essential role within the community. Bringing individuals from different backgrounds together to form a safe and supportive space promotes wellbeing, social cohesion and integration within diverse communities.

To get a real sense of what it looks and feels like, and of the individuals involved, filming a documentary seemed the only way to do Juan’s story justice. In addition, it opened my eyes to the opportunity for carrying out research that is more insightful, influential and accessible to a wider range of audiences.

An interdisciplinary team was formed to bring together the different knowledge and skills required, which drew upon academic expertise on the voluntary sector (CVSL – the Centre for Voluntary Sector Leadership), migration (the OU and the University of Birmingham) and accessible filmmaking (the University of Roehampton). In addition, we worked with experienced filmmaker Joseph Mannion, from Pal. Using an iterative process, we worked together to draw upon our differing expertise, being mindful that Juan provided input throughout. It was a fascinating experience to ensure that an equal balance was portrayed of the different viewpoints and approaches, not only during filming but in the final documentary.

As is the case with most research, we didn’t know what the final outcome would be when we started and we watched the story unfold over the process of filming and editing. What came through clearly was the story of leadership. Not only Juan’s role as an individual leader, but also the collective nature of leadership being shared with the community. Following on from Chris Cornforth’s blogpost Leadership at the Top, the documentary travels to the other end of the spectrum to explore what leadership looks like from a bottom-up perspective. And, even more interestingly, from the view of those who hold little status or positionality within society. Although this area receives considerably less recognition than, say, that of charismatic leaders in authoritative roles, arguably there is an even greater need for such examples if others are to be inspired and an even playing field opened up for leadership development. (See, for example, my earlier blogpost Celebrating Diverse Leadership).

The documentary An Asylum Seeker’s Story: Collective Leadership in Diverse Communities will be launched at CVSL’s annual conference, Putting Leadership and Collaboration into Practice in a Changing Voluntary Sector, on Thursday 22 March at The Open University. It will be followed by a Q & A with the participants and producers and you are warmly invited to join us by booking your place here."

Dr Vita Terry is a Research Fellow at CVSL. The documentary was completed on a voluntary basis by the participants and team and Dr Terry would like to express particular gratitude to Juan, his family and the other participants. The ESOL classes (and documentary) could not exist without such inspiring individuals and their dedication to social change. In addition, she would like to thank the team for their hard work, long days and commitment both to Juan’s story and to the documentary. They include Kate Dangerfield (University of Roehampton), Andrew Jolly (University of Birmingham) and Joseph Mannion (Pal). Finally, she would like to express her gratitude to CVSL, without whose support in funding production costs the documentary could not have been made.

To find out more about the documentary, please email Dr Terry.