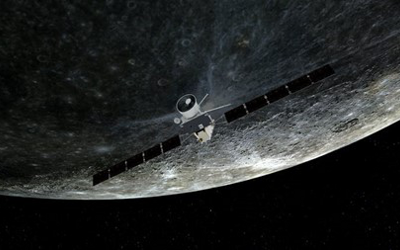 The BepiColombo spacecraft – a joint project by the European and Japanese space agencies – swung by its destination planet Mercury in the early hours of October 2 2021. Passing within just 200km of the surface of Mercury, it sent back some spectacular pictures.

For those of us who have worked for a decade or more on this mission, there could hardly be a way better to celebrate what would have been the 101st birthday of the mission’s namesake, Italian mathematician and engineer Giuseppe Colombo. His groundbreaking work in this area earned him the title of the grandfather of the planetary fly-by technique, now more often termed a “swing-by”.

BepiColombo’s cruise from Earth began in October 2018, and its journey is far from over. It will travel twice around the sun in the time it takes Mercury to orbit the sun three times (around 264 days). This will allow it to rendezvous with the planet for another swing-by on June 23 2022.

After a total of six Mercury swing-bys, the cumulative effect of the planet’s gravity will reduce the spacecraft’s velocity to the point where it can fall into orbit with Mercury around the end of 2025.

Left: the location of the three MCAMs on the Mercury Transfer Module, seen in an exploded view of the spacecraft stack. Right: artist’s impression of the stacked spacecraft.

BepiColombo is actually composed of two connected spacecraft and a propulsion unit. During its cruise through interplanetary space, the European orbiter (called the “Mercury Planetary Orbiter” or MPO) is attached on one side to the interplanetary propulsion unit (or “Mercury Transfer Module”). On the other, it carries a Japanese orbiter named Mio (or “Mercury Magnetospheric Orbiter”), plus a sunshield to prevent Mio from overheating.

This stacked configuration obstructs the openings through which sophisticated visible, infrared and X-ray cameras inside MPO – capable of imaging and analysing Mercury’s surface in great detail – will operate once MPO finally becomes free-flying. In fact, most of BepiColombo’s science instruments will be wholly or partly inoperative until each orbiter is set free, around December 2025.

Until a relatively late stage in mission planning, it was accepted that BepiColombo would be “flying blind” during its whole cruise from Earth, including during swing-bys – meaning no images would be available until orbit around Mercury had been achieved.

But the level of public interest aroused in 2015 by by images of comet 67P from the Rosetta mission led BepiColombo engineers Kelly Geelen and James Windsor to propose that low-cost lightweight cameras should be added to the spacecraft.

By the end of 2016, it was agreed that three small monitoring cameras – each only 6.5cm in length – would be mounted onto the craft. These would snap planetary pictures during swing-bys.

It was decided to place these cameras on the Mercury Transfer Module, where they would also be able to monitor the deployment of the solar panels that provide the spacecraft with power, the magnetometer boom used for measuring magnetic fields, and the communication antennae.

Extremely small and light monitoring cameras carry out a range of functions on a spacecraft such as BepiColombo.

During BepiColombo’s first Mercury swing-by, the fields of view of monitoring cameras two and three tracked across the planet. Camera three showed us part of the southern hemisphere, beginning with a view of sunrise over Astrolabe Rupes – a striking feature named after a French Antarctic exploration ship.

Astrolabe Rupes is a 250km long “lobate scarp” – a long, curved structure marking where one part of the planet’s crust has been pushed over nearby terrain, due to the whole planet contracting as it slowly cooled.

There are some much smaller equivalent features on the Moon, but Mercury is the only nearby celestial body where lobate scarps are known to occur on such a large scale. 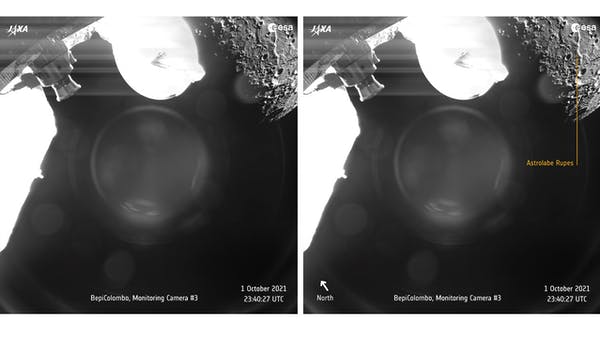 Astrolabe Rupes catches the light of the rising sun, captured at a range of 1183km. MPO’s transmitting antenna is brightly lit in the foregound, contributing to a ghosting effect in the middle of the image

Four minutes later, the perspective had changed enough to reveal a wider area: including the lava-flooded, 251km-wide Haydn crater and Pampu Facula, one of many bright spots likely formed by explosive volcanic eruptions. Both of these features attest to Mercury’s long volcanic history, at its most active more than three billion years ago but probably persisting until around one billion years ago. 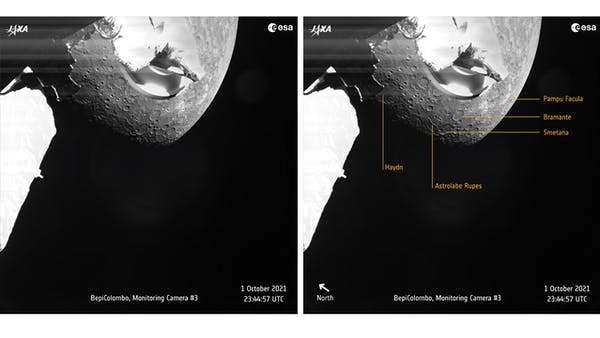 Astrolabe Rupes is still visible in this image taken at 2687km, allowing a wider area of the planet’s surface to be seen.

Meanwhile, camera two focused on Mercury’s northern hemisphere, including the region surrounding Calvino crater: an important location for deciphering what lies in the layers of Mercury’s crust.

It also showed Lermontov crater: a region which appears bright because it is host to both volcanic deposits and “hollows”, where a currently unknown volatile ingredient of the crust is being lost to space via a mysterious process.

Nasa’s MESSENGER mission orbited Mercury between 2011 and 2015, revealing a perplexing planet. We are still struggling to understand its composition, origin and history. 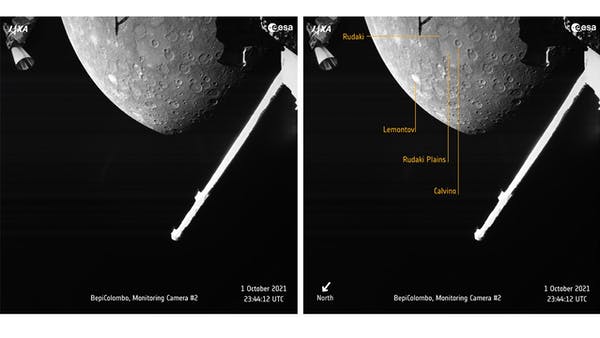 At 2418km, Mercury’s North hemisphere is towards the lower left, and a brightly sunlit magnetometer boom is in the foreground.

Why Mercury has features such as explosive volcanoes and strange, unique hollows on its surface is just one of the problems we hope further study will solve. Once in orbit, BepiColombo’s advanced payload of scientific instruments will help us understand more about how Mercury formed and what it’s made of.

Read more: The more we learn about Mercury, the weirder it seems

In the meantime, these extraordinary swing-by pictures at least remind us that we have a healthy spacecraft heading to an exciting destination.