Brexit, academic freedom and where the law stands on universities being quizzed about what they teach 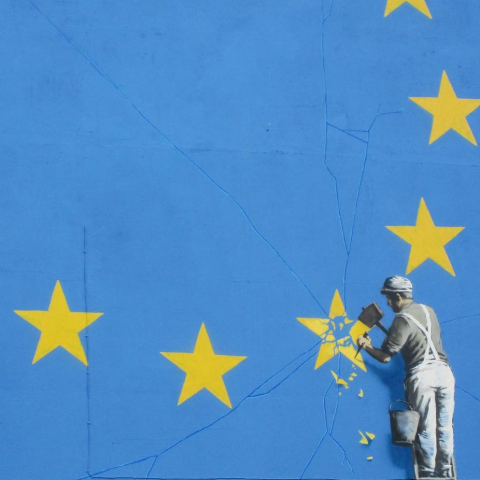 It started with a letter. A seemingly simple request for information, sent by the Conservative MP Chris Heaton-Harris to university vice-chancellors.

But you don’t even have to read between the lines before alarm bells start to ring, because in the letter, Heaton-Harris requests access to university course documents as well as the names of professors involved in “the teaching of European affairs, with particular reference to Brexit”.

The UK government has distanced itself from the letter, which has understandably caused outrage at universities across the UK. Many academics have spoken of their anger at such requests, calling the letter “sinister” and accusing the MP of carrying out a “McCarthy-style witch hunt”. 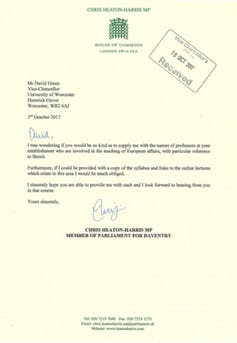 To put this into context, while asking a vice-chancellor for information regarding the institution generally is of no concern, it is unusual to address them for detailed matters of curriculum in this way. This is mainly because the information is held by the faculties and schools delivering the teaching. The curriculum of most universities is also publicly available and easy to research, via university websites. On top of this, universities also publish prospectuses outlining their whole teaching offering.

Then there is also the issue of the request of the specific names of professors engaged in teaching of “European affairs”. The question is: why would it matter? If parliament was interested in what courses are taught at UK universities, that information is publicly available. It is the link to the personnel involved in the delivery of the teaching that adds a very different flavour to what is claimed to be a harmless information request.

It is questionable then as to why an MP decided to approach universities via their vice-chancellors – what can only be described as at the highest and most bureaucratic level. In this way, it cannot have been for the purpose of gathering information quickly and efficiently. Instead, it rather suggests that this exercise was meant to gather information about specific aspects of academics and their work without their knowledge.

Although much has been done to downplay the letter since its publication, it is clear many (both inside and outside of academia) have already read this as the first step in an attempt to undermine academic freedom – by questioning universities impartiality in education and purpose in society.

On a legal level, it could be argued that it prepares an infringement of the freedom to expression as secured by Article 10 of the Human Rights Act 1998 and Article 19 of the Universal Declaration of Human Rights. These underpin the ability of any society to engage with critical and controversial issues and sit at the core of the democratic process.

Only if the expression of differing views is protected, can it be ensured that we live in a society where opinion is formed based on critical engagement with opposing views.

Heaton-Harris has since spoken out to defend his stance on free speech in universities. But it seems the damage has already been done. It is well known he is no supporter of the European Union, and was working on the side of the Leave campaign before the UK referendum on EU membership. Viewing these requests in light of his political agenda, academics are understandably critical regarding the actual purpose of his letter.

David Green, vice-chancellor of Worcester University, who was the first to draw attention to the letter, has been clear that Heaton-Harris will not receive the information he asks for. Though it is unknown whether, and how, other vice-chancellors responded.

Many academics though have seized the chance to challenge the letter at face value, and sent Heaton-Harris public invitations to their lectures.

A threat to democracy

Academic freedom – just like freedom of expression – is an underpinning of a functioning democracy. And in this way, it is threatened when democracy is at threat. So rather than opposing views being seen as merely a challenge to the established way of thinking, they are seen as a threat to power. And all of this comes at a time when many academics both in the UK and beyond, will have watched with horror, when the Turkish president, Recep Tayyip Erdoğan, launched his attack on academic freedom and academic colleagues in the aftermath of an attempted military coup in 2016.

A spokesman for the UK prime minister, Theresa May, has since said Heaton-Harris sent the letter in his capacity as a Member of Parliament, not on behalf of the government. Jo Johnson, minister of state for universities and science, has also been quick to condemn the request.

Johnson suggested Heaton-Harris should probably not have sent the letter and that he was very much regretting his decision. Speaking on BBC Radio 4’s Today Programme, Johnson told listeners he had spoken with Heaton-Harris, who was requesting the information for his own line of inquiries – part of a wider research project for an apparent book.

Johnson also took the opportunity to reinforce that “the government is absolutely committed to academic freedom and to freedom of speech in our universities”. But of course, it wasn’t that long ago that Michael Gove was saying “this country has had enough of experts”. It is no wonder then that the letter has received such “unexpected” outcry, as the quest to defend academic freedom seemingly continues.