Call for new regulations around civil weddings to avoid backlogs 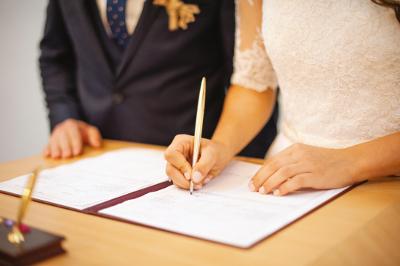 An OU researcher calls for a change to regulations around civil wedding ceremonies so that more people can get married simply and inexpensively, and to avoid COVID-19 backlogs.

Limited opportunities to marry for £127

Dr Stephanie Pywell, Senior Lecturer in the OU’s Law School, conducts research into civil wedding ceremonies, ranging from the content of such ceremonies to the cost and availability of a minimal ‘two-plus-two’ ceremony, as publicised on the websites of 34 local authorities in England and Wales.

She investigated the cost of getting married in a minimal civil ceremony – attended by only the couple, two registration officers, and two witnesses – in England and Wales, and the availability of such ceremonies. Her findings, which were published in in the Law Society Gazette, reveal that couples in about one in three local authority areas are not able to get married for the £127 that the law prescribes.

Dr Pywell also discovered that not many couples manage to get married in minimal ceremonies, as such ceremonies are available only at limited times in a very small number of register offices. “This means that when weddings are permitted again, there will be a backlog,” said Dr Pywell. “And that will increase the demand, presumably for all kinds of ceremonies, including the ‘two-plus-two’ ceremonies that the articles are about. So that makes it even more important that more ‘two-plus-two’ slots are made available.”

According to Dr Pywell, the Law Commission has an opportunity to recommend that the Home Secretary should instruct the Registrar General for England and Wales to issue regulations obliging the ‘proper officers’ of all local authorities to guarantee that all couples can marry for no more than the prescribed fees, and to increase the availability of two-plus-twos. The regulations could usefully be supplemented by a Circular, supplementing the Handbook for Registration Officers – Marriages, stipulating that the necessary information must be readily accessible on local authority websites.

“This would bring a welcome end to the current absurdity that the cost and availability of a two-plus-two ceremony are determined principally by where the potential spouses live,” said Dr Pywell.

Find out about OU Research in Law