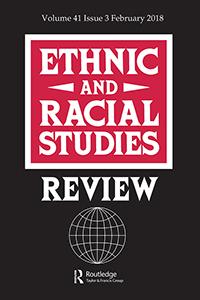 An excerpt from a paper to introduce a special issue on ‘Race and Crisis’ of Ethnic and Racial Studies, to be available in print in summer 2018, is posted below. Satnam Virdee and Suman Gupta wrote this in May-June 2017, and it was published online in August 2017.

The immediate task of this paper was to give a sense of developments between summer 2015, when the special issue was conceived, and summer 2017, when contributions became available for publication. Between conception and realisation, we felt, the European socio-political context we were focusing on had changed. To convey this change, the paper looked closely at national level elections in this period, in particular to consider the success of nationalist anti-EU parties in terms of their share in the popular vote. In reportage around elections, it was generally held that their success was significantly due to the positions they took on immigration and citizenship. The paper tried to gauge these positions with reference to their manifestos. The manifestos that we quoted are listed at the end of the excerpt: of FPÖ in Austria, DF in Denmark, NF in France, AfD in Germany, PVV in the Netherlands, PiS in Poland, SVP in Switzerland, and UKIP in the UK.

These are fast moving times in Europe, and much that is relevant has happened in the few months between August 2017 and January 2018. In the paper, judging by opinion polls, we had anticipated that AfD would get 8-12% vote share in the September German federal elections. In the event, AfD got 12.6% of the vote share, making it the third largest in Germany. In the Austrian legislative elections of October, FPÖ got 26% of the vote share, increasing from 20.5% in 2013. Consequently FPÖ entered government in coalition with ÖVP. In the Norwegian parliamentary elections in September 2017 the vote shares of the top three parties were similar to those in 2013. FrP, which calls for restriction of immigration, retained the third position; but FrP is not quite as vehemently anti-immigrant as those mentioned above (see the FrP website). Unlike Norway, the Czech legislative elections of October 2017 saw a significant shift upwards for new parties, with ANO winning by some distance with 29.6% of the vote share. Like other major Czech parties, ANO rejects EU refugee quotas.

‘Austria is not a country of immigration. This is why we pursue a family policy centred around births’,

effectively the racial basis of citizenship is asserted. And when AfD (2017) declares:

‘We want to withdraw the birthplace principle [Geburtsortsprinzip] (acquisition of German citizenship by birth in Germany, even though neither parent is German), and return to the principle of origin [Abstammungsprinzip] as applied till 2000’ (29),

that’s a bid to retrieve an unambiguously racial basis for citizenship. Almost all the manifestos mentioned above seek to adjust the legal norms of citizenship so as to putatively defend the historically authenticated citizen from the threat of corruption and infiltration by suspect immigrants. On the one hand, this involves introducing legal provisions for withholding citizenship from those who would be entitled to it under the existing regime; on the other hand, it involves adjustments to the legal norms to enable withdrawal of citizenship where that is already acquired or owned. The first could be regarded as a short-term way of using citizenship as a bargaining chip; the first and second together could be considered a long-term programme for purifying the citizenry. It is the second which is worth focusing on: that implies making it a legal norm to introduce distinctions or gradations within the body of existing citizens in a political state. Such proposals disturb the legal first principle of the equality of citizens in the eyes of the law; ergo, they suggest that certain existing citizens should be considered more suspect than others by legal definition, and as having different fundamental rights compared to others in law. These proposals rebound into the existing populations of political states to legalize second-class citizenship. Variously, such proposals for making existing citizenship removable apply to persons with dual citizenship, naturalized citizens, and in one case (AfD) ‘citizens from migrant backgrounds’ who may be accused of or suspected of being criminals or terrorists (as observed above, these terms merge into each other). If such proposals become enacted in law, all dual citizens, naturalized citizens and ‘citizens from migrant backgrounds’ would become legally different from other citizens. They would become more suspect than other citizens, subject to punishments that are different from those for other citizens committing the same offences – therefore, second-class citizens in law.

‘wishes  for  naturalization legislation to be designed in such a way that Danish citizenship can be revoked by a judgment if the person in question commits a serious crime, or has been part of or has participated in terrorist acts in Denmark or abroad’ (32)

‘take the view that British citizens who choose to fight alongside terrorist organisations effectively abdicate their rights to citizenship’ (13);

‘Denaturalization and expulsion of criminals with a dual nationality’. With regard to suspect citizens, AfD 2017 proposes measures grounded on its bid to return to a racial basis for citizenship:

The naturalization of criminals should be controlled by: 1. Stopping the acquisition of German nationality by mere birth in Germany, since, among other things, members of criminal clans automatically become German citizens thereby; […].

Finally, the expatriation of criminal citizens with a migration background should be made possible when: 1. There is evidence of serious criminality within ten years after successful naturalization; 2. In case of participation in terrorist organizations (e.g., IS); 3. If they are affiliated to criminal clans, even if that means expatriation so that they become stateless. (21)

Similarly, there are the NF 2017 campaign promises, which effectively remove the threats of immigrants procreating or migrant miscegenation:

26 Reducing legal migration to an annual balance of 10,000. Ending automaticity of family consolidation and reconciliation, as well as the automatic acquisition of French nationality by marriage. Remove the suction pumps from immigration.

27 Delete the right of the soil: the acquisition of French nationality will be possible only by filiation or naturalization, the conditions for which will become more stringent. Deletion of dual extra-European citizenship. (6)

SVP 2011 is clearest in suggesting that all naturalised citizenship is suspect:

Problems ‘naturalised’: Due to the mass naturalisations of the past few years, many people who received the Swiss passport have not been integrated. A not insignificant number of new Swiss do not understand any of the country’s national languages, do not accept the local customs and, shortly after their naturalisation, commit a criminal offence. Statistically though, these people are then counted as Swiss. As a result, many problems with foreigners were simply ‘naturalised’. (32)

The schematic approach taken here to focus on electorally successful nationalist parties and their manifestos might give the impression that such concepts of citizenship are entertained, and measures proposed, only by that category of parties. It is possible that parties which are otherwise liberally inclusive or even socialist might also uncritically accept and promote similar measures, especially under the pressure of political polarization. Readers of this special issue can determine for themselves what share of the electorate of any contemporary European nation-state might subscribe to such notions irrespective of the parties they vote for.

FPÖ 2011, Party Programme of the Freedom Party of Austria (available in English)