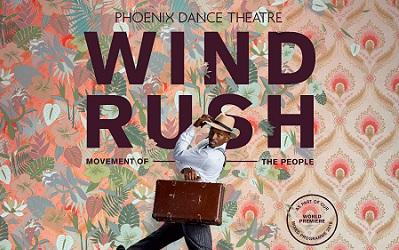 This short provocation was written by Professor Giles Mohan, Director of the OU's Research Network in International Development and Inclusive Innovation. This article references a production by The Pheonix Dance Theatre, the UK’s longest standing contemporary dance company outside of London. This production is being performed tonight (4 May, 2018) and tomorrow in Birmingham and on the 9 and 10 May in Newcastle upon Tyne. It will be back in November, with productions in York and Barnsley. Ticket prices are between £8 and £22.50.

A few weeks ago I went to see The Phoenix Dance Theatre’s new production called Windrush: Movement of the People.

Phoenix is a contemporary dance company and this was their latest piece, performed as part of a mixed programme. I live in Leicester which is a highly multicultural city and the audience that night were a mix of races and ages. The performance takes us from the sunny Caribbean to the journey to London and the trials and tribulations of living in Britain. Like James Berry’s poems that I discussed in yesterday's post it was bittersweet. The male migrants leaving the Caribbean were separated from their loved ones and the dancers flirted in a mix of excitement and sadness at their imminent departure, suitcases in hand, their movements languid. On arriving in Britain their reception into the working class neighbourhoods of grey, post-war Britain were riven with bewilderment and hostility as the dancers huddle in dun-coloured clothes. There was a brilliant scene where the laundry hanging on the communal clotheslines have letters on them which spelt out ‘No Irish, no blacks, no dogs’. But this wasn’t a story of victimhood. Chinks of humanity burst through and we see relationships between Jamaicans and British emerging, and the social life of black Britain was condensed into a party scene where the music morphed from jazz to soul and funk.

The Leicester audience was diverse and so too were their reactions. I was sat near a group of white teenage girls from a dance school who commented on the complexity of the dance moves. In front of us a group of older people, possibly of Caribbean decent, guffawed at one scene where a white woman singularly fails to dance well alongside her Jamaican suitor.

For me the dance captured something of the feeling of what it meant to migrate all that way. And that a multi-national, multi-racial dance company is performing to multi-national and multi-racial audiences speaks to the importance of these mobilities and their evolving legacies.