Day 70, Year of #Mygration: Exodus: The Digital Passage to Europe for Syrian Refugees 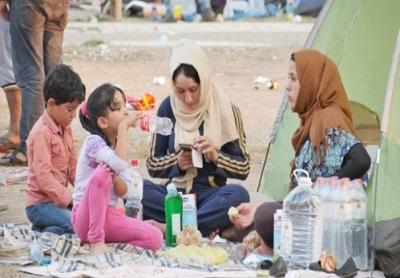 Written by Marie Gillespie, Professor of Sociology at the Open University, Souad Osseiran, and Margie Cheesman

Over the last seven years, the mass exodus of Syrians fleeing the brutality of the ongoing war in Syria has had a devastating toll on lives and homes. Half the country's prewar population have fled and more than six million people are displaced inside Syria. Another five million are refugees in neighbouring countries. A million people have fled to Europe. While European policy-makers have started talking about the return of millions of Syrians, the war continues. In the northwestern province of Idlib, a quarter of a million people were forced out of their homes in addition to one million people already displaced inside the province. In Eastern Ghouta the starvation and destitution of nearly half a million Syrians has wrought untold suffering. About one-third of all homes and schools, and about half of all medical facilities, have been damaged or destroyed in the conflict. While about 66,000 refugees returned to Syria in 2017, neighbouring countries closed their borders to about 300,000 refugees. And among those who did return, there is evidence that this was not voluntarily. Some only returned after losing hope that their lives as refugees could ever improve.

Amidst this monumental enduring human devastation and suffering, the intervention of the digital on refugee mobilities and experiences has prompted a reconsideration of how forced migration needs be reconceived and researched. Relying on the first-hand experiences of Syrian and Iraqi refugees who used smartphones to reach Europe, our recently published article, ‘Syrian Refugees and the Digital Passage to Europe: Smartphone Infrastructures and Affordances’, applies an infrastructural lens to the analysis smartphone ‘affordances’ – the point of intersection between what technologies allow people to do and what users actually do with them. These included the communicative and networking affordances that enabled refugees to connect with and maintain their social networks; the locatability or navigation affordances for wayfaring; and the multimedia affordances that allow for the capture and circulation of multimedia resources such as voice recordings, maps and images.

Our research explored how, with each of these smartphone affordances, comes a dialectical tension between the possibilities for benefit but also for harming refugees. The same affordances that allow refugees to ‘keep on moving on’ and communicate with families and friends are also used by hostile regimes and/or ISIL forces to trace and target activists and political opponents. The locatability affordances which provide orientation and are navigation and survival tools for refugees also involve geo-locatable data that enable state and non-state actors to monitor and exclude, capture and detain, repatriate and return refugees. Furthermore, while the multimedia affordances of smartphones enable refugees to document and share their personal stories, and open up new possibilities for information gathering and the co-production of knowledge and representation, they also run the risk of promoting the circulation of misinformation and personal exposure as, for example, when recorded images of torture or abuse on refugees’ phones fall into the hands of the perpetrators, causing untold harm and even death.

We struggled to find a way of managing these tensions and to avoid falling prey to unhelpful dichotomies and polarities. We tried to offer a nuanced conceptualisation of smartphones in order to move beyond sterile debates that pit techno-optimism versus techno-pessimism. Rather, we attempt to demonstrate the granular, ambivalent, contradictory ways in which smartphones are at once an essential tool and lifeline and yet can pose many risks and that these risks have to be and are managed in extremely resourceful ways. The refugees with whom we worked saw the primary threats of surveillance or harm caused by smartphone use as emanating from the repressive socio-political circumstances in their countries of origin. In contrast, en route, the pre-eminent fear was that of ‘infrastructural violence’ - infringements to their connectivity – especially when smugglers or border guards seized or damaged their smartphones. Fewer refugees expressed fears of online surveillance by state actors once they were in Europe despite a forcefully expressed distrust in official state and even in some Humanitarian organisations such as UNHCR. In examining that point of intersections between infrastructures and affordances, we show how new, unforeseen ‘imagined affordances’ emerge, enmeshed within a dynamic and emergent infrastructure that both enables and constrains refugee mobilities and visibilities – of the need to move, stop and wait, hide and become invisible, move on and become visible – the refugee’s journey never really ends.

Applying the digital infrastructure approach offers a way in to a deeper understanding of these dialectical tensions: invisibility and exposure, mobility and immobility, risk and opportunity. Our research also resonates with the experiences of other vulnerable groups on the move, homeless and/or destitute. A smartphone makes users visible, connected, networked, but this can also expose them to risks. Spaces of control are often invisible and difficult to research. Refugees migrating to Europe walk a fine line between taking precautions to remain invisible to surveillant actors and organisations, and depending on their smartphones for support, care, protection and information. The material, relational conception of digital infrastructures that we develop in the article proposes a new analytical framework for contextualizing refugee experiences within a wider socio-technical ‘assemblage’ – rather than just looking at one individual or group’s relationship with one device.

This research, at the intersection of infrastructural and affordance-based approaches, brings forth important avenues for further research. In particular, we propose this is a powerful way of thinking about justice, borders and ethical policy frameworks. It is evident that understandings of – and means of combatting – the multifarious forms of “infrastructural violence” (Rodgers & O’Neill, 2012) endured by refugees must be developed and ‘mobile commons’ can be one way of doing so. We also propose that we need to investigate further how all actors, not just refugees, involved in facilitating, managing, controlling and preventing migration use digital devices. We challenge the ‘turn to digital connectivity’ as an easy solution to the ‘migration crisis’ but we also acknowledge and imagine what ‘smart migration’ might look like. Furthermore, we argue that we need a much better understanding of the ways in which apps function as part of the digital infrastructure that enables new forms of data power – via data gathering and circulation mobilising power over, through and to refugees. Being alive to the ethics and politics of researching refugees alongside other vulnerable mobile groups also forces us to adopt mobile methods and new modes of participatory research practices, and to guard against research practices and outcomes that might work to facilitate control rather than protection.

Finally, there is a pressing need for states as well as international organizations to reconsider – with the support of ethnographic evidence – how they might re-imagine and integrate smartphone applications into strategies and programmes for refugee integration, care, protection and outreach without falling prey to simplistic digital humanitarianism. Nevetheless, access to reliable and relevant, trustworthy and timely informations remains key to information security. As an example of the ways in which academia, policy and practice may productively meet, we mentioned how our Mapping Refugee Media Journeys report provided the rationale and evidence to the European Commission to fund a new digital news and information platforms for (and with) refugees in Arabic, English and French. The InfoMigrants.net initiative, launched in March 2017, is a laudable step towards reducing information precarity. Yet, the value of the platform for diverse refugee groups is still unknown, even as we continue to research this mobile-first platform. Despite such efforts towards better digital provision, the policy imperative for European Member States to prevent and control ‘irregular’ migration to Europe thwarts such initiatives, and compounds the dangers refugees face. They are left with no option but to engage with smugglers and criminals, and to continue making dangerous journeys across seas and deserts; as we continue to document in our work in Greece and Turkey many refugees continue to perish as the world looks on