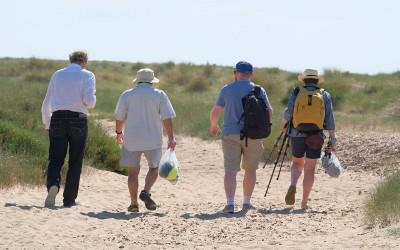 A film about those who live among sand dunes is the subject of a film launched on World Sand Dune Day (25 June 2021).

Living with Dunes explores the complex environmental problems of climate change, biodiversity, and habitat loss in focus at one location: Holme-next-the-Sea, North Norfolk. The Holme sand dunes and the people, flora and fauna who live with them are the central subject of this film.

North Norfolk is an area of low-lying sandy cliffs, dunes, mudflats, creeks, freshes and saltwater marshes. The area is an important bellwether and a de facto UK laboratory in terms of climate change and coastal vulnerability.

Released on World Sand Dune Day 2021, the film celebrates the vitality of Holme dunes. We hear about their importance as a home, a habitat, a place to visit and a dynamic soft sea defence.

“The research is important because it uses creative practice to bring the issues of climate change, biodiversity and habitat loss into sharp focus at a specific site. We have started with a non-human element, the sand dunes at Holme-next-the-Sea and placed that as a central subject in our film. These dunes provide a mosaic of habitats for a huge range of biodiversity; they offer protection to those species, and, as a dynamic soft sea defence, they offer protection to those who live in vulnerable coastal areas like North Norfolk.

Our work is based on the value of creative practice (sound, film and so forth) as a collaborative tool for public engagement around environmental issues. We are learning how important it for the film maker/artists and academic researchers to work together in that engagement process, both in the making of the film/sound work and in deliberating the issues raised.”

Living with Dunes is broadcast at 10am on Friday 25 June 2021 on a Facebook stream from Dynamic Dunes.

The process of making and watching the film creates potentially transformative spaces of public engagement. All those involved, including the research and film team, have opportunities to learn, think, and maybe make up or change their minds.