Day 57, Year of #Mygration: Gender, Skilled Migration & IT industry, a study of India & the UK 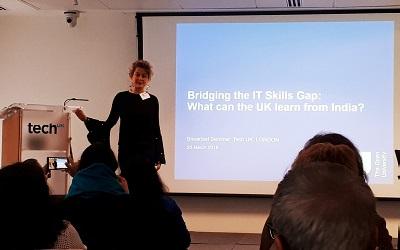 The global IT sector is characterised by low participation of women, with the UK being no exception. Many attempts have been made to address the problem of small and falling numbers of women in IT education, training and employment because narrowing the gender gap in high productivity sectors like IT will add 150 billion GBP to the UK GDP forecast for 2025. However, these attempts have had little success.

A new report was launched this morning, publishing the findings of an OU-led, ESRC-funded project - Gender, Skilled Migration and IT industry: a comparative study of India and the UK. The project has been comparing the profiles of the IT industry in UK with that in India. It considered why the IT sector in India, in contrast to many places including the UK, manages to attract such a high proportion of women in highly-skilled roles. It also gained insights from migrant women and men who move between the two countries, and have experience of both cultures, to understand both the gender norms and the best practice in each country.

The report highlights that the Indian IT sector: