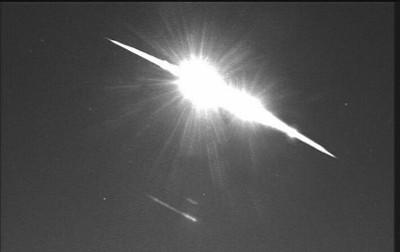 As people in the UK were settling down to watch the late evening news on February 28, a fresh news story, quite literally, appeared in the night sky. A large and very bright fireball was seen over southern England and northern France at 21:54 GMT. It was recorded by many doorbell webcams, so it was a very well-observed fireball. More importantly, it was also captured by the automated cameras of the UK Meteor Observation Network and similar networks.

Working with colleagues in France and Australia, the meteor-watchers worked out the fireball’s trajectory and determined where the meteorite pieces could be located, just north of Cheltenham in the UK. Based on their calculations, Ashley King, a specialist in meteorites at the Natural History Museum in London, made an appeal on local TV and radio stations for information about any unusual black rocks seen to have fallen from the sky.

Among the photographs he received, there was one that caught his attention: a small mound of dust and pebbles on a driveway in the small village of Winchcombe. King asked Open University researcher Richard Greenwood (who lived closest) to check out the sample. Greenwood was overwhelmed to find that not only was it a meteorite, it was a very rare species. The UK had got lucky – we had a new member to add to our meteorite collection. 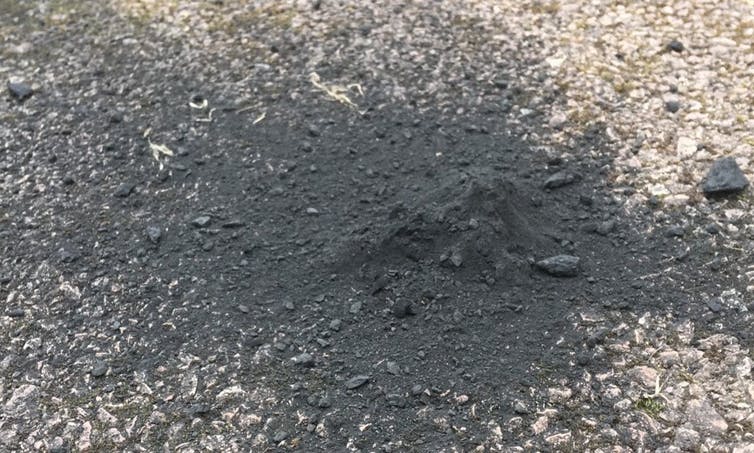 The main mass of the meteorite on the driveway where it fell.

Owner of the driveway, Author provided

Over the following four days, specialist researchers from several UK institutions formed teams to systematically search the countryside surrounding Winchcombe. The results of their labours are several stones weighing around 500g, plus a lot of dust and fragments. The specimens are now at the Natural History Museum.

Why is this such a big deal? Meteorites are divided into two main groups: primitive and processed. The primitive ones come from the solar nebula that gave birth to the Solar System, preserving the composition of this original material. In contrast, processed samples have been altered by heat. They are from larger bodies and contain information about planetary surfaces and interiors. 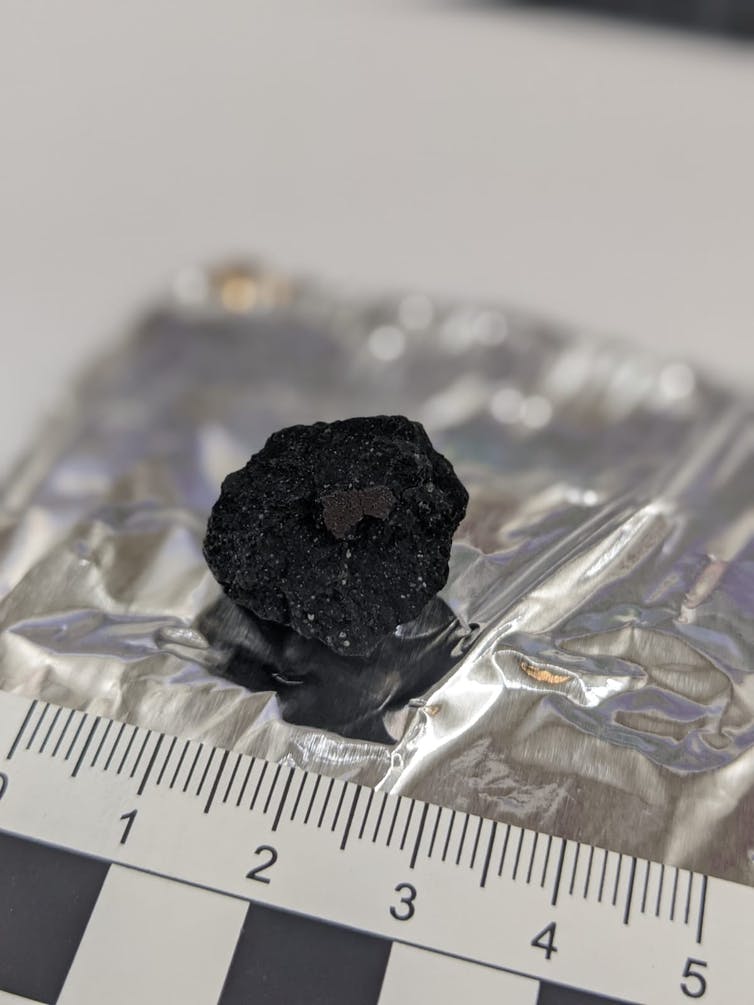 The stones that fell over Winchcombe are from the former group – and not only that, they are of a sub-category, known as carbonaceous chondrites – the most pristine (or unchanged) of all meteorites, carrying records of the earliest stages of Solar System history. They are rich in organic compounds: the molecules that form the building blocks of life. They also contain tiny specs of dust from stars that have died and are older than the Sun.

Some of the newfound rocks are almost completely black and featureless, while others are dark grey with irregular, pale patches. Clearly, it is a complex meteorite, possibly one that has come from the surface of an asteroid where several different bits of asteroid have got mixed up during collisions.

And here is where things become a little ironic: scientists are currently collecting samples from two asteroids in space. About five grams of material collected by the Japanese Hayabusa2 mission from asteroid Ryugu arrived safely in December 2020. Nasa’s Osiris-Rex mission is on its return trip from asteroid Bennu carrying around 200g of material that will arrive in September 2023. These missions cost a lot of money, but could help unveil the secrets of the origins of life and the Solar System. And then just out of nowhere, almost 500g of rock from an asteroid, that is possibly very similar to Ryugu and Bennu, falls over part of England.

Meteoriticists in the UK will now analyse the material, practically on a grain-by-grain basis. Things must happen in a sequence – there are time-sensitive measurements that have to be carried out within the first month or so of a fresh fall. Meteorites are not radioactive – they don’t emit harmful radiation – but they do contain elements that are unstable and fall apart. And if we can measure the amounts of the elements that decay very quickly, then we can get valuable information.

We must also take a good look at the organic compounds in the meteorite – there is always in danger of contamination from Earth. So the quicker we can analyse its organics, the better. The more we can understand about these materials in meteorites, the more we can piece together the chemistry that led to life on Earth. This can give an idea of how widespread that chemistry might be (or have been) in the Solar System - and even the universe.

Searching for a meteorite in a small village and its surrounding fields is not usually hazardous and requires little in the way of risk assessment: ask permission of the owners to access their land, observe the country code, remember to close gates and don’t tread in anything soft. But in the time of a pandemic, everything changes.

The UK government currently forbids citizens from travelling far from home, unless the travel is essential. Was it essential for a group of meteoriticists to travel to Winchcombe? Yes, it was. Each had completed fieldwork risk assessments and received permission to travel from their institutions. They were scrupulous about wearing masks and keeping a 2m distance when talking to locals. 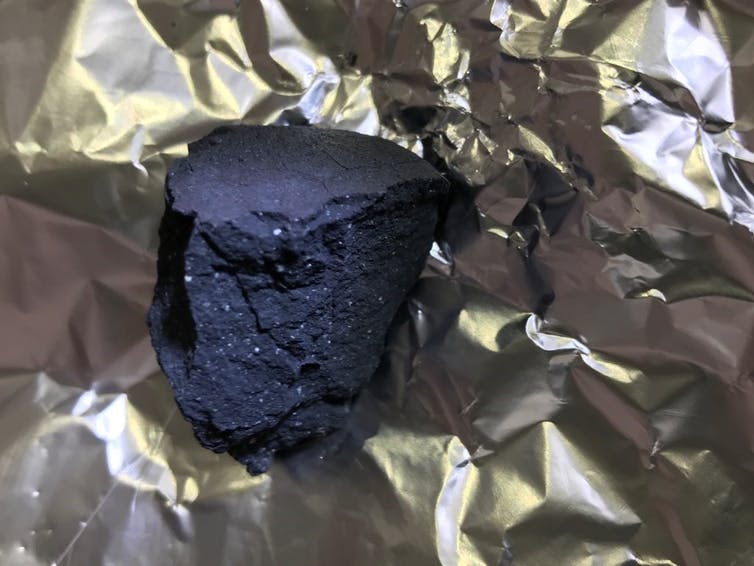 One of the larger stones, about 5cm long. Its crust is the remainder of the surface that got heated as the meteorite came through the atmosphere.

I would have loved to have been involved in the search - although my colleague Sara Russell told me that cleaning the owner’s driveway with a toothbrush palled after the first hour. My arthritic knees would not have coped with that. But I was back at base, doing something just as important: putting machinery in motion to get the risk-assessment paperwork for Greenwood sorted. And, as a reward, I got to see the first close-up photographs of our new family member, dubbed “Winchcombe”. It may look a bit like a broken barbecue briquette, but to me, it is absolutely beautiful. 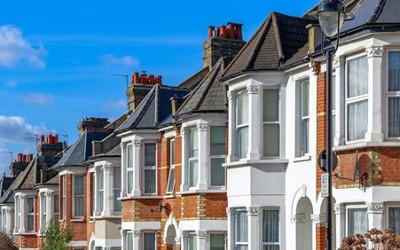 The UK remains a nation of homeowners, with two-thirds of all dwellings belonging to the people who live in them. But as interest rates swiftly rise, there are fears that many of those households will soon find their mortgage payments unaffordable.