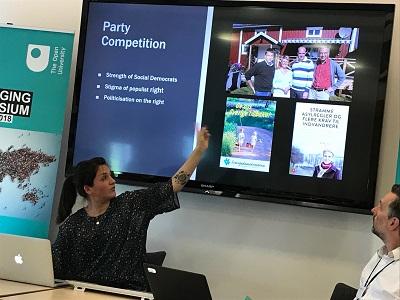 "According to what is sometimes called ‘the progressive’s dilemma’, it is hard to combine a progressive welfare state with open refugee policies. Yet if this was the case, how come two of the world’s most progressive welfare states, Sweden and Denmark, have pursued very different asylum policies? Understanding this divergence can help us figure out how the dilemma can be moderated or overcome.

"Sweden’s and Denmark’s asylum policies started to diverge in the early 90s. From the mid-90s, immigration became more politicised in Denmark and especially since the 2001 election, the country has had a very restrictive approach. Sweden, in contrast, has tended to, on the whole, safeguard the rights of asylum seekers. The divergence culminated in a TV debate on refugee policy in September 2015, co-hosted by Swedish and Danish national televisions. In the debate, cross-country differences overshadowed left-right ideological divides.

"This divergence can be explained by the countries’ different models of nationalism and imaginaries of the nation. The progressive’s dilemma is partly based on the notion that people are less willing to share with people who they do not identify with. Self-interest or the threat of force are not enough, some argue, to motivate people to support the extensive redistribution of resources that the welfare state requires. To sustain the welfare state it is therefore suggested that citizens, who are essentially strangers to one another, are encouraged to instead view themselves as compatriots. By feeling a sense of belonging together, a special bond, these strangers-made-compatriots will be happier to part with their hard earned income and contribute to the welfare of all. This also entails, however, that outsiders can undermine the welfare state as they are not seen to share this special bond.

"Yet, the vast number of studies looking at the effect of diversity, or of national identity, on support for the welfare state have had very mixed results. This inconclusive evidence, and especially large cross-national differences, suggests (unsurprisingly) that categories encompassing ‘diversity’ are constructed. What it means for society to be diverse or for someone to belong depends on what belonging is based on. Nationalism constructs who ‘we’ are and ideas of what keeps us together – the basis of national solidarity. It can do so in ways that are more or less exclusive.

"In these respects, Denmark and Sweden have been described very differently. Even though the welfare state is a central part of both states’ vision of the nation, Sweden’s nationalism is much more focused on the state itself and its institutions, whereas Denmark’s focus is on a culturally homogenous people. In Sweden, the welfare state is mirrored in the imaginary of the nation. The nation becomes ‘the system’, ‘the Swedish model’ and the modernising and civilising (welfare) state institutions. They ensure that people are equal and free. In Denmark, these values are more closely tied to the notion of the Danish people and Danish culture. In this way, the progressive’s dilemma is arguably heightened in Denmark, because refugees who are culturally different will disrupt the cultural idea of the nation. In contrast, in Sweden refugees can simply be integrated (and ‘civilised’) through active welfare state institutions.

"But how good is this Swedish (welfare) state nationalism at moderating the progressive’s dilemma? Two months after the Danish/Swedish TV debate, Sweden proceeded to close its borders. In September 2015, a Social Democratic minister proclaimed that Sweden should be proud to have one of the most generous asylum policies in the world and the Prime Minister stated at a Refugees Welcome manifestation that his Europe does not build walls. Two months later the new restrictive policies were presented, explicitly aimed at bringing Swedish policies to the EU minimum standard. Refugees were not so welcome anymore.

"The fact that Swedish policy is moving closer to Danish policy could be explained looking at the sheer number of refugees that came in 2015. Yet Sweden has consistently received a much higher number of asylum applicants than Denmark in the past decades. If numbers dictated how similar welfare states approach refugees, then the countries would have converged in policy long ago.

"Instead, one important explanation is that Swedish party politics has become similar to the Danish in three respects, all highlighted by researchers (Green Pedersen & Krogstrup; Rydgren) in explaining policy divergence on immigration: (1) the Swedish Social Democrats are historically weak, meaning that they can no longer set the agenda around traditional welfare issues; (2) the extreme right party the Sweden Democrats have become less stigmatised and enjoy a prominent role in Swedish politics; and (3) the right and centre-right in Sweden are contributing to politicise immigration issues. These changes challenge the image of Sweden as the ‘good guy’ and Denmark as the ‘bad guy’ in refugee policies. When Swedish parties are subject to similar competition dynamics as their Danish counterparts, they seem to react in similar ways in terms of policy. But the crucial question for the progressive’s dilemma is whether, following convergence in policy and politics, Sweden and Denmark are also converging in nationalism.

"Preliminary results from my research on Swedish and Danish policy, undertaken by a Leverhulme Trust funded project and which includes interviews with Swedish and Danish politicians, suggest that such convergence has not taken place. The right and some centre-right parties have started to promote a more cultural nationalism, as these results suggest. But importantly, the Swedish Social Democrats have not moved in such direction, in contrast to the Danish Social Democrats. It is expected that parties to the right will have a more cultural, conservative view of the nation. This is also the case in Denmark, where many parties on the left are very critical of the nationalism of the parties to the centre and to the right. It is thus the position of the Social Democrats that is really evidence of any cross-national convergence, and through analysis of policy-documents and interviews with politicians in both countries, I do not detect such convergence.

"Rather, the closure of Sweden’s borders follows the logic of the (welfare) state nationalism. The same rhetoric as was used in 2015 – that ‘the system’ was ‘collapsing’, that institutions could not take it anymore and that the government was therefore regretfully forced to keep refugees out – was employed in 1989 when the then Social Democratic government introduced very restrictive policies to stem the flow of asylum seekers. Perhaps Denmark are prone to closure to protect its ‘people’, but Sweden is very keen to protect its (welfare) state.