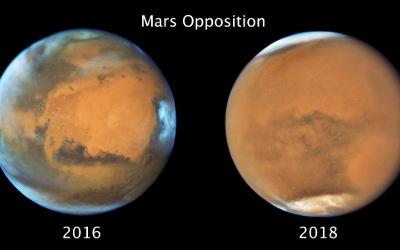 OU research shows the effects of global dust storms on the atmosphere on Mars.

In a paper presented on 23 July 2021 at the virtual National Astronomy Meeting 2021, Dr Paul Streeter in The Open University’s Faculty of Science, Technology, Engineering and Mathematics, describes a dust storm that engulfed Mars in 2018, which destroyed a vortex of cold air around the martian south pole and brought an early spring to the hemisphere. By contrast, the storm caused only minor distortions to the polar vortex in the northern hemisphere and no dramatic seasonal changes.

Over two weeks at the beginning of June 2018, localised dust storms combined and spread to form an impenetrable blanket of dust that hid almost the entire planet’s surface. The global dust storm, which coincided with Mars’s equinox and lasted until mid-September, proved fatal to NASA’s solar-powered Opportunity rover.

Dr Streeter and colleagues from The Open University (OU), NASA and the Russian Academy of Sciences examined the effects of the event on the martian atmosphere by combining data from a Mars Global Climate Model with observations from the European Space Agency’s ExoMars Trace Gas Orbiter, Roscosmos and NASA’s Mars Reconnaissance Orbiter missions.

Dr Streeter, who also completed his PhD at the OU on studying the transport and atmospheric effects of dust on Mars with a special focus on dust storms, says: “This was a perfect opportunity to investigate how global dust storms impact the atmosphere at the martian poles, which are surrounded by powerful jets of wind in winter. Since the last global storm in 2007, several new missions and instruments have arrived in Mars orbit, so the 2018 event was the most-observed to date.”

Previous research has shown that high levels of dust in the atmosphere can have significant effects on polar temperatures and winds. The vortices at the winter poles also affect temperatures and the transport of air, dust, water, and chemicals, so their disruption could mean substantial changes in the martian atmosphere.

Different effects in each hemisphere

The team found that the 2018 storm had profoundly different effects in each hemisphere. At the south pole, where the vortex was almost destroyed, temperatures rose, and wind speeds fell dramatically. While the vortex may have already been starting to decay due to the onset of spring, the dust storm appears to have had a decisive effect in ending winter early.

The northern polar vortex, by contrast, remained stable and the onset of autumn followed its usual pattern. However, the normally elliptical northern vortex was changed by the storm to become more symmetrical. The researchers link this to the high dust content in the atmosphere suppressing atmospheric waves caused by the extreme topography in the northern hemisphere, which has volcanoes over twice as tall as Mount Everest and craters as deep as terrestrial mountains.

Dr Streeter adds: “Global dust storms at equinox may enhance transport into the southern pole due to the diminished vortex, while the more robust northern vortex continues to act as an effective barrier. If this pattern for global dust storms holds over the course of the thousands of years that Mars maintains this particular axial tilt, it has implications for how dust is deposited at the north and south poles and our understanding of the planet’s climate history.”