Day 177, Year of #Mygration: Decolonization and Feminisms in Global Teaching and Learning 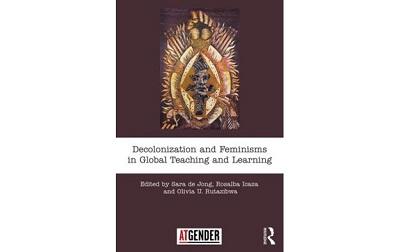 Dr Sara de Jong, Visiting Research Fellow at The Open University, has co-edited a new book, 'Decolonization and Feminisms in Global Teaching and Learning'. The book has a number of chapters discussing issues pertaining to immigration.

This international collection is a timely interrogation into what it means to decolonize teaching and gender. The compilation is placed within the context of recent global political movements which have sought to challenge the traditional university and disciplinary structures. This includes reflections on migration and pedagogy.

In one chapter in this volume, "The liability of foreignness: decolonial struggles of migrants  negotiating African identity within UK nurse education" Roselyn Masamha’s account of her own experience as an African migrant nursing student in the UK, alongside her analysis of the educational journey of other Zimbabwean nursing students, demonstrates the continuities of colonizing education. She insists on the rights of so-called “foreign” students in Europe to challenge the Eurocentrism of the education they receive, refusing to be a silent “guest“.

Another chapter presents a manifesto written by 16 participants of the 'Crossing Borders' Conference in Lesbos in 2016, which critically interrogates the borders (re)produced during the conference itself, including linguistic borders, epistemic borders, and historical borders.

Indeed, as the editors argue in the introduction of the edited volume, the postcolonial link between the metropole and the periphery so well captured by Ambalavaner Sivanandan in the aphorism “We are here, because you were there” (quoted in Younge, 2018), has been given a new twist in the context of the so-called refugee crisis, reminding us of the link between conflict, Western arms transport, and military intervention. Decolonizing education within migrant-receiving countries with historical and contemporary links to the roots of displacement necessarily includes interrogating how border practices intersect with modern/colonial educational structures. For instance, the lucrative fee-paying student quickly becomes an undesirable migrant when they have finished their studies, while highly skilled asylum seekers are barred from education during the endless asylum procedure –– yet they do feature as objects of research, being the subjects of academic expertise.

Offering a varied set of reflections on research practices, grounded both in feminist and decolonization theories, the contributions in this volume brings to the fore the issue of decolonising the university, the politics of knowledge and the analysis of power relations, which have been profoundly shaped by critical feminist agendas. To root this book in the political struggles that inspire it, and to maintain the close connection between political action and reflection in praxis, chapters are interspersed with manifestos formulated by activists from across the world, as further resources for learning and teaching.