Day 156, Year of #Mygration: Frida Kahlo, Self Portrait along the Border Line between Mexico and the USA, 1932 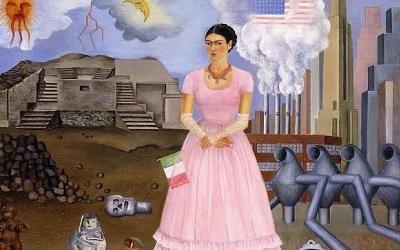 Over the past two days Trump’s controversial US immigration policies have been under the spotlight in our Year of Mygration posts. Today follows that trend but moves away from a legal, political and sociological analysis as Dr Warren Carter, Lecturer in Art History in the Faculty of Arts and Social Sciences shows how art can speak to and inform current political debates. The video is part of Open Arts Objects, a project from the Open University that explores - through a series of 35 films, how ancient artifacts relate to, and explain, histories and human associations. While the films teach viewers the critical tools to look at works of art, they also deal with a broad range of topics such as economics, colonialism, trade, globalisation, national borders, social inequalities, gender and identity.

Frida Kahlo, Self Portrait along the Border Line between Mexico and the USA, 1932

In this short film, Dr Warren Carter discusses the 1932 Self-Portrait on the Borderline between Mexico and the United States by the Mexican artist Frida Kahlo. The artist produced many self-portraits during her lifetime but it was those that she painted whilst in the United States in the early 1930s that are perhaps the most fascinating. Dr Carter provides a close iconographic reading of Kahlo’s painting before looking at what it might say about the complex relationship between Mexico and its more powerful northern neighbour during the depths of the Great Depression. He then finishes by looking at the work’s contemporary relevance in light of ongoing political debates about the Mexican/United States border, one of the most significant international border zones in the world.

Find out more information by accessing the OU's OpenLearn platform.