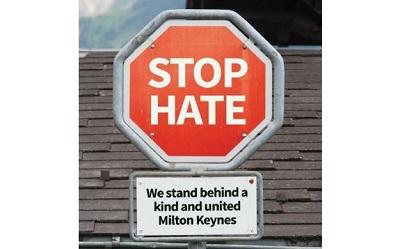 We all want to live in a world free from prejudice and hate. Unfortunately, in real-life, hate and prejudice exist. Even one incident is too much for a victim or a witness to the crime.

Data recently shared with the Fight Against Hate campaign team by Thames Valley Police suggests that hate crime has risen both nationally and in Milton Keynes from July 2017 – June 2018 compared with 2016 – 17. There has been a rise nationally of 13% and locally of 12%.

Race crime accounted for 77% of the total. In 2017-18 there were 469 (up from 319) hate crimes in Milton Keynes and 308 (down from 309) hate incidents. The number of hate incidents/crimes in Milton Keynes was higher than anywhere else in Thames Valley. However, the rate of hate crime per 10,000 population was lower than in Reading, Slough and Oxford.

These statistics highlight why as a society, we can’t stand by and let other members suffer abuse and attacks. Encouraging victims and witnesses to report the incidents aside, it is critical to raise awareness on hate. It is in this context that The Open University, alongside like-minded organisations, is supporting the initiative aimed at promoting harmony and social cohesion in our diverse societies.

The No To Hate Crime Campaign was founded in March 2009 by Mark Healey and Ryan Parkins to mark the 10th anniversary of three London Nail Bomb attacks on Brixton, Brick Lane and Soho. In October 2009, the first London Vigil Against Hate Crime to stand up for all those affected by hate crime was held. Over 29,000 people shared the event on Facebook and over 10,000 people attended the first vigil in Trafalgar Square. In 2012 the London Vigils evolved into National Hate Crime Awareness Week #NationalHCAW.

To mark the national hate crime awareness week, The Open University is hosting the Harmonies4Harmony Music Festival, with a gathering of business leaders, school representatives, Thames Valley Police and Milton Keynes Council.  This is part of the Fight Against Hate Campaign run under the umbrella of Citizens:MK, a community organising network, that has over a dozen members including The Open University, working on promoting citizens’ engagement with those people in a position to make a difference. There is consensus around the need for promoting social cohesion and non-discrimination to enable all members of society to get on with their lives without fear of being called names or attacked.

Pupils from Great Linford Primary School, Jubilee Wood Primary School, Summerfield Primary School and St Paul’s Catholic School will perform and ask power holders from Milton Keynes Council, Arriva Bus, Thames Valley Police, Network Rail, among others, to make pledges on fighting hate and promoting harmony among members of communities in Milton Keynes and beyond. Arriva Bus and Network Rail will unveil the fight against hate campaign poster that will be displayed on buses and at the three Milton Keynes railway stations, to mark the national hate awareness campaign.

Raising awareness is critical on a number of fronts, including: