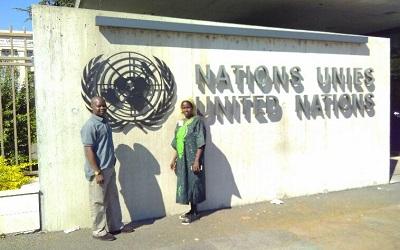 Following on from Kas Sempere’s blog last week looking at the impacts of forced displacement in post-peace settlement in Colombia, here, Jo Mountford, International Advocacy Advisor at Christian Aid, talks about the GP20 campaign through which Christian Aid have been bringing the voice of internally displaced people to the heart of decision-making in the UN.

The Open University has a strong history of collaboration with Christian Aid.  This year the two organisations have come together with academics and civil society organisations from the global North and South to form the ‘Rethinking Research Collaborative’ (to be launched later this year). This built on previous work co-led by Dr Jude Fransman, Research Fellow in the Institute for Educational Technology, with Christian Aid, which culminated in the production of a Rethinking Research Partnerships Discussion Guide and Toolkit.

Around the world there are over 40 million ‘internally displaced people’ (IDPs) – these are people who have been forced to leave their homes, but have remained in their country of origin rather than crossing a border. Although there are around twice as many IDPs as refugees globally, this group has historically received much less attention. Christian Aid is working to shine a light on the plight of internally displaced people in the countries where we work, including Syria, DRC and Colombia.

Christian Aid is supporting the GP20 Plan of Action launched in the 20th anniversary year of the UN Guiding Principles on the Rights of Internally Displaced People. This multi-stakeholder plan aims to improve protection for those displaced forcibly inside their own countries, and prevent and reduce internal displacement.  The Plan is based around 4 main priorities:

Christian Aid has been instrumental shaping the campaign and is taking the lead on improving the participation of IDPs in decisions that affect their lives. One way in which we have facilitated the participation of IDPs in decision making was by arranging the attendance of two internally displaced people at key UN meetings in June this year. These included the first ever High Level Panel at the Human Rights Council on internal displacement, and discussions about internal displacement at the UNHCR annual consultations with NGOs. Christian Aid supported the participation of Cleto Kunda, whose family has been displaced by conflict in South Sudan, and Orpha Ibrahim, who has been displaced with her family by Boko Haram attacks in Borno State, Nigeria. Cleto and Orpha attended the meetings to present the challenges that their communities are facing and provide recommendations for how both provision for IDPs, and their participation in decision making, could be improved. Read more about Cleto and Orpha’s stories in this Christian Aid blog and check out this video from the recent UN meetings, highlighting the voices of internally displaced people around the world including Cleto and Orpha.

Christian Aid is working alongside UN agencies and the UN Special Rapporteur on Internal Displacement to raise the profile of internally displaced people. We are pleased that the UK Government has expressed support for the GP20 Plan of Action and are calling for IDP host states to support and lead this. This will be crucial to addressing the needs of the millions of internally displaced people around the world. More information about the GP20 campaign can be found on the campaign website, where it is also possible to sign up to support the campaign. There is also a need for more research and data about IDPs, in order to improve policy making on internal displacement. The Refugee Law Initiative is currently setting up an IDP research network for academics and practitioners working on this.