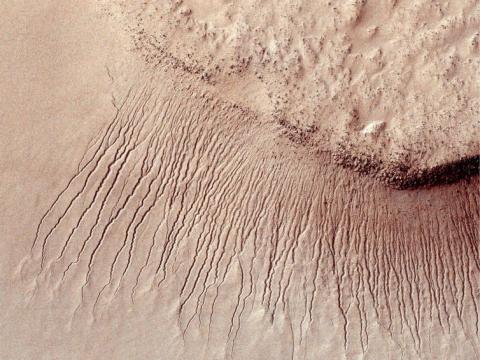 The surface of Mars, with its dune flows, gullies and slope movements, is the result of sediment being transported downwards in the recent past as well as today. But this “mass wasting”, typically caused by flows of water – for example, how the gullies on Earth are shaped – has proved a mystery to planetary scientists. This is because it is assumed that huge amounts of water are needed to form these features.

The problem is, there is a lack of enough water on Mars now and in the planet’s recent past. In a new study published in Nature Communications, we simulated the atmospheric conditions on Mars to discover how these features could have come about without a big flow of water.

For example, scientists have made assumptions about the water budget necessary to form the so-called “recurring slope lineae” – dark streaks at the surface which appear annually (687 days) during peak temperatures and which dissolve in colder months at the martian surface. But the water needed to create these features would be too high to come from the martian weather each year.

In our experiments, however, we identified that it is possible to transport sediment down a slope without the need for so much water. We did this using the Mars Simulation Chamber, specialised equipment that is able to simulate the atmospheric conditions on Mars.

To explain how mass wasting can happen without lots of water, it’s important to know that the present-day atmosphere of Mars is very thin – the mean pressure is around 7mb (millibars) (compared to 1,000mb on Earth). In relatively recent times (around 20m years) the pressure has also been low. These low pressures mean that liquid water will boil at low sediment temperatures of around 5°C. It means that liquid water will effectively “levitate” on the surface of Mars (when temperatures are above the zero). This “levitating” and boiling water can entrain a large amount of sand and other sediment when flowing down a slope. This process would require much less water than would be needed otherwise.

With this background information we wanted to test how liquid water flows behave under low pressures and with relatively warm surfaces (between 5°C and 24°C, which is warm for surfaces of Mars, but not impossible). The questions we posed in our experiment were: how does the boiling affect transportation mechanisms? Will there be more or less sediment transported with the effect of boiling? And can we see new transportation mechanisms taking place?

Previous work has investigated sediment transport by liquid water or melting ice under martian conditions, but the phenomenon of levitation or hovering of a water-sediment mixture over warm sediment was not observed in their experiments. This phenomenon is comparable with the so-called “Leidenfrost effect”, easily seen when you put some water drops on a hot cooking plate. The water sublimates immediately and the drop floats on a cushion of gas emanating from the drop. This mechanism could also happen on Mars, but as described before with much lower temperatures slightly above the frost point.

Our experiments show that this phenomenon can move huge amounts of sediment down a slope without the need for much water – around nine times more sediment was moved down a slope with the effect of levitation than without the effect. Our model also showed that the lower gravity on Mars would have a positive effect on levitation: with lower gravity we would expect an increased rate of the amount of transported sediment over longer distances.

This means in particular for Mars that it is possible to explain already observed mass movements on its surface with the involvement of less water than previously predicted and that the amount of water needed for some transportation processes could have been previously been overestimated.

The question of a possible origin of the water needed for the levitation could not be solved during our experiments, and also here further work has to be made to solve this uncertainty. Nevertheless, our experiments show that such a mechanism is possible on Mars (when the parameters are correct) and should be taken into account when thinking about water-related mass wasting features on Mars. Our experiments will not give the answer of how recent and present-day mass wasting features of the martian surface (in particular gullies and recurring slope lines) are forming, but we do provide a new perspective.