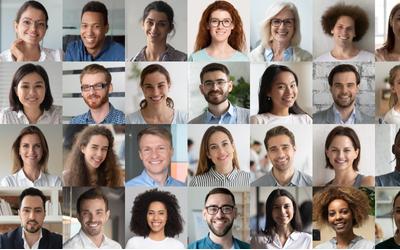 Dr Catriona Havard from the OU’s Forensic Cognition Research Group argues we’re not as good as we think we are at matching faces and explains her research to make human facial recognition less error-prone and potentially damaging.

Our faces are unique. Each tells the story of our lives, our ancestry, and millions of years of human evolution. They are also crucial to how we identify ourselves and each other.

Most of us believe we’re good at recognising faces and unfamiliar face matching - deciding if two different images of a face are the same person or two different people – in particular. Indeed, since the invention of photography, human facial recognition has been fundamental to everything from passport control to police identity parades. Nonetheless, a wealth of psychological research suggests that correctly matching two faces can be challenging and error-prone.

The implications of misidentification can be life-changing

“It’s something of a myth that we’re good at telling strangers apart”, argues Dr Catriona Havard, an OU expert in the psychology of facial recognition.

“We place huge trust in professionals’ abilities to match photographs to people. Still, you only have to look at evidence such as the fact that imposters using stolen passports of people who look like them is now a more significant problem than people travelling on forged documents, to see that the human eye is not infallible.”

Incorrect identifications also threaten criminal justice and damage lives. Lawyers Peter Neufeld and Barry Scheck founded The Innocence Project in 1992 to exonerate the wrongly convicted through DNA testing and criminal justice reforms in the United States. Of the 232 miscarriages of justice the project has since overturned, more than 60% involved eyewitnesses making an incorrect identification. More than half of those wrongly convicted were Black.

“My colleagues and I in the OU’s Forensic Cognition Research Group have found matching a face to a photo becomes even more inaccurate when the person making the decision is a different race to the faces they are trying to identify” Havard explains.

“This is called the own-race bias, or cross-race effect, a phenomenon whereby people are much better at identifying faces of the same race than they are at identifying the faces of people of a different race.”

The complexities of matching faces

During the past 15 years, Havard, who says her fascination with faces and their variability began at an early age, has dedicated her career to examining the errors people make in facial identification to find ways to reduce them.

Her latest study asked close to 400 people in the UK and China to match photos of pairs of faces. Half of the faces were Caucasian, and half were Asian. Some of the faces were whole, while others had distinguishing features obscured. The research yielded some unexpected results.

“Obscuring the pictured individuals’ internal features such the eyes, nose and mouth, made it difficult for our participants to match their faces. Moreover, they found it even more challenging to match the faces of people from different races when we removed external features, such as hair”, the researcher notes.

Havard’s research has also found that the background colour of images can impact our ability to identify people. For example, in the UK, the police typically use one of two systems to film digital identity parades. In one, they film the suspect and people of similar appearance in a specialist booth with a uniform grey background. In the other, they film individuals against a green screen, which can appear different on camera depending on the light and shadow of its surroundings.

“People are much more likely to make false identifications among pictures with different coloured or shaded backgrounds than uniform ones. Notably, such backgrounds increase the chance of both Black and Caucasian people misidentifying a Black person”, she explains.

Race is just one of many unconscious biases

While Havard’s recent research has considered race, the facial recognition expert emphasises that people have other biases when matching faces.

“At a biological level, this suggests we pay more attention to and are therefore better able to recognise people similar to ourselves.”

A job for specialist talent

So, what does this all mean for professional human face matchers? Is Artificial Intelligence the way forward? Yes, and no, says Havard.

“The trouble with AI is that it’s only as good as the images its human operators feed it. For example, suppose the people developing the software populate its database with images of Caucasian men. In that case, it will be great at identifying Caucasian men but might struggle to match the faces of Black women. This is where bias and errors creep in. Even when software does make an accurate match, it still needs a human eye to make certain that the person in two images is the same. The challenge is to ensure those people commit as few errors as possible.”

Nonetheless, the facial recognition expert says minimising human error is not simply a question of training.

“We’ve found that existing training doesn’t make people better at matching unfamiliar faces. However, we have determined that some people are naturally better than others. Together with the evidence that we are better at identifying the faces of those most similar to us, this suggests that border protection agencies, police forces and other relevant organisations should focus on recruiting people from diverse backgrounds with an innate talent for these tasks.”